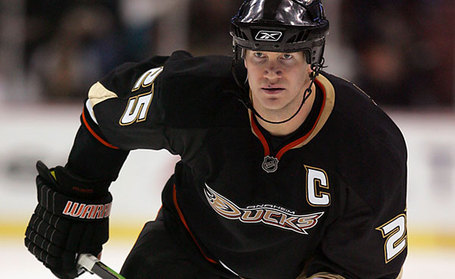 Recently, the trade rumors surrounding the Boston Bruins have centered on Anaheim defenseman Chris Pronger. The Ducks reportedly want a deal that includes Phil Kessel plus some prospects and/or picks. Yesterday, the Ducks traded for defenseman Ryan Whitney, which could signal the end of Pronger's days in SoCal. The Ducks are looking to clear up some cap space and build for the future by moving Pronger and his $6.25 million contract that will expire at the end of the 2009-2010 season. Chris Pronger and Zdeno Chara would not likely be paired together, but can you imagine having Chara AND Pronger on the blue line for the B's?

Pros
- He is an absolute beast
- Another veteran in the room
- Solid pointman on the PP
- All-around game (only defenseman since Bobby Orr to win Hart Trophy)
- +152 lifetime
- Playoff experience (134 career playoff games)...and a Stanley Cup
- Wouldn't be just a rental player (has one year left on contract)

Cons
- $6.25 million contract
- Phil Kessel would likely be shipped out of town
- Can they get him without tearing up core of team?
- Has a reputation as someone who takes bad penalties
- Can the B's still re-sign some of their expiring contracts with Pronger's $6.25 million cap hit?