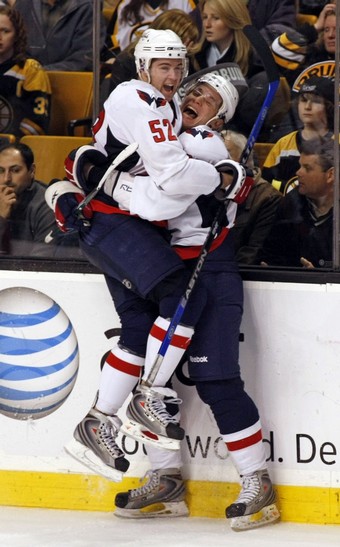 This afternoon's game at The Garden was exactly what we have come to expect when the Bruins and Capitals meet, except this time the home team lost. With the B's on the power play, Zdeno Chara fired a wrister from the left dot to knot it up at 3-3 with 4:37 left in regulation to eventually force the game to overtime. Alexander Semin ended the game for the Caps just 22 seconds into overtime when Tim Thomas couldn't handle a slap shot from the neutral zone (officially recorded as 69 feet) that deflected off Thomas' glove and into the back of the net. Matt Hunwick and Phil Kessel also found their way onto the scoresheet by potting goals in the 4-3 loss.

- The Bruins reached a few milestones today. Zdeno Chara scored his 100th NHL goal on his game-tying power play goal in third period, while Shawn Thornton suited up for his 200th NHL game.

- B's fans booed Alex Ovechkin every time he touched the puck. Apparently, we are turning into Habs fans...you know, without the Euro Trash fashion sense and soccer chants.

- Semin's slapper from the AirTran logo wasn't the Caps' only flukey goal of the game. The Capitals scored the go ahead goal in the third when Tomas Fleischmann tried to slide a cross ice pass in front of the goal that caromed off of Dennis Wideman and past Tim Thomas.

- The B's are off until Tuesday, when they host the Philadelphia Flyers.