Share All sharing options for: B's [insert pun] in Philly 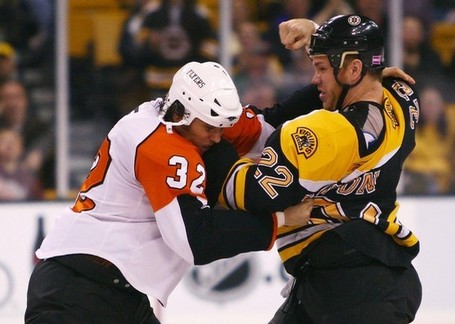 The B's are in Philly to take on the Flyers for the first time this season. The Bruins enter tonight's game having won their past 2 contests, while the Flyers will try to get back on track after a 4-0 loss to the St. Louis Blues.

- Tim Thomas will get the start in goal for the B's, while Martin Biron will be between the pipes for the Flyers.

- This will be the first time that Andrew Alberts and Glen Metropolit will face their former teammates since departing The Hub of Hockey.

- This will be the first time that Patrice Bergeron will face the Flyers since the hit by Randy Jones on October 27, 2007 that left him on the shelf with post concussion syndrome for the remainder of the '07-'08 season.

- Are the Broad Street Bullies back? The Flyers lead the league in fighting majors (54) and PIMs per game (19.1).

- Bruins are Flyers have an indentical 83.1% success rate on the penalty kill.

SBN Hockey's newest blogger Travis Hughes from Broad Street Hockey asked me a few questions about the Bruins and in return he was nice enough to answer a few of my questions:

B's fans haven't had a chance to see the Flyers yet this season. How have Andrew Alberts and Glen Metropolit been for the Flyers this year?

Metropolit has been a third or fourth line guy primarily, but he's a good veteran presence. Lately he's been on a line with Scottie Upshall and rookie Darroll Powe (pronounced POW!) and boy, that line has some jump in their step. They define the term "energy line" and you always notice when they're on the ice. They just don't stop moving. Alberts has been a decent pickup as well. I wasn't happy with the move at the time because I thought Holmgren was panicking only three games into the season. My opinion hasn't changed really on that, especially since it's hurt us a bit cap-wise, but it's an easier pill to swallow because Alberts has played above expectations. He's one of those guys you don't really notice out there, and that's always good for a defenseman because you know he's not making many mistakes.


Was there any friction between Alberts and Hartnell at the beginning of the season?

Nah. The very first thing Hartnell did when Alberts showed up with the Flyers was go over to him and apologize. Apparently they had a laugh about it, Alberts said there were no hard feelings, and they moved on.


Does Randy Jones really have the flu or is he just fearing retribution?

He legit has the flu and he missed Saturday's game in St. Louis with it, but I'd be surprised if he wasn't ready to go Wednesday against the B's.

If the Flyers and Phantoms played today, who would win?

I would hope to God the Flyers, but the Phantoms did win a preseason game at the Spectrum in September. Scott Munroe, the Phantoms goalie, would give some of the Flyers a run for their money for sure. He's not too bad.


There seems to be a goalie controversy in Philly, how is the goaltending situation going to shake out as we approach the trade deadline and the playoffs?

That's a good question. I know I mentioned Munroe in the last answer, but he's probably not in the picture as Flyers goalie of the future. It's going to depend on how Biron and Niittymaki play down the stretch here. If one of them gets red hot, we could see the other one traded away at the deadline perhaps for some defensive depth. I'm confident in both of them to carry a team in the playoffs though, honestly. A lot of Flyer fans feel differently, but Biron proved in the playoffs last year that he can carry a team deep. He kept us in some of the Pittsburgh games we lost in the Conference Finals, too. As for Niittymaki, he led the Phantoms to a Calder Cup the year of the lockout (beating the Providence Bruins in the process), and as you know there was a lot of strong competition at the AHL level that year. If I were running the show, I would hold on to both of them until the offseason and then decide. There are so many options in free agency this year, including both Biron and Niittymaki and your guys Thomas and Fernandez, that the team would be silly not to explore every avenue.

Neither. I prefer Talk Of The Town. It's right off of the Broad Street/Sports Complex exit of the Schyukill Expressway (I-76), and you'll no doubt pass it if you're in Philly for a game. Right on the corner of Broad and Pollock about a 60 second drive from the Wachovia Center. Highly recommended, although it's in what looks like a modified garage and the power surges about five times through the course of your meal. Good eats, though, are all that matters.

Be sure to check out Broad Street Hockey and welcome Travis to SB Nation.

I was too lazy to think of a witty headline today, so feel free to post your own headline in the comments section.