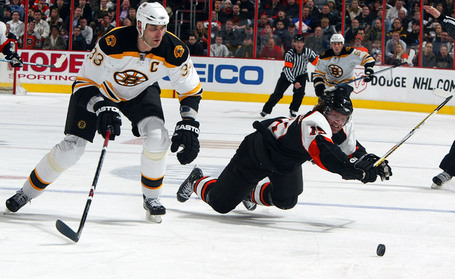 The Bruins collected their third straight win by downing the Philadelphia Flyers 3-1 tonight. Michael Ryder put the B's up 1-0 at 3:07 of the second period when he tipped in a Dennis Wideman slapper from just inside the blueline. The Flyers pulled even just over two minutes later when Joffrey Lupul threaded a pass to Scott Hartnell, who beat Tim Thomas for his 19th of the season. Just under six minutes into the third, David Krejci won a face off back to Shane Hnidy who fired a wrist shot towards the net. Krejci was able to get to the net and deflect Hnidy's shot past Matin Biron to put the Bruins up 2-1. The Bruins lit the lamp just 35 seconds later when Dennis Wideman fired a shot from the point to give the Bruins a two goal cushion at 3-1. Tim Thomas made 25 saves to secure the win.

- The Bruins seemed to get better as this game went along. I thought they looked a bit lackluster in the first. They really controlled play in the second (even though they couldn't convert on their power play opportunities). Then in the third they put the game away with a pair of goals.

- The Thornton-Yelle-Bitz line played well tonight. They were strong on the puck all night long and did a great job of keeping the puck in the offensive zone.

- The Bruins are still struggling on the power play. They are now 0 for their last 17 with the man advantage.

- I was glad to see that Milan Lucic was OK after taking a shot from Aaron Ward off the ankle.