B's face-off against Sens in Ottawa

Share All sharing options for: B's face-off against Sens in Ottawa 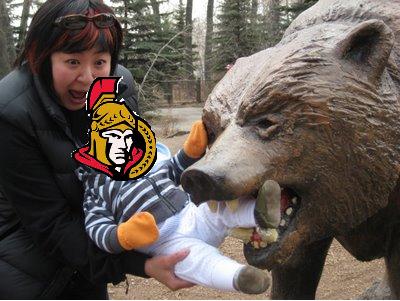 The Bruins will be gunning for their 4th straight win tonight when they take the ice at Scotiabank Place against the struggling Ottawa Senators. The Senators will be looking for their first win under new head coach Cory Clouston. The Sens lost to the Los Angeles Kings 1-0 in Clouston's first game behind the bench.

- The Ottawa Senators fired their head coach Craig Hartsburg this week. The Senators were a disappointing 17-14-7 under Hartsburg. Hartsburg was replaced by Binghamton Senators head coach Cory Clouston. Clouston has a 59-48-20 record in two seasons behind the B-Sens bench.

- The Senators have called up former BC standout Ryan Shannon from the Binghamton Senators. Shannon has 35 points (10-25-35) in 36 games for the B-Sens this season.

- Continuing with the theme of Binghamton call ups, Brian Elliot will get the start in goal tonight for Ottawa.

- Dean McAmmond will be a healthy scratch for Ottawa.

- After playing last night, he Bruins did not have a full morning skate planned for this morning. Fluto Shinzawa is reporting that Byron Bitz, Manny Fernandez, and Petteri Nokelainen are expected to be the only skaters this morning.

- Claude Julien is not talking to the media until this afternoon so there is no word on what the lineup will look like. I would expect the lineup to the same as last night.

- The Senators get almost all their production from their first line (Spezza, Alfredsson, and Heatley). The Bruins need to shut that line down.