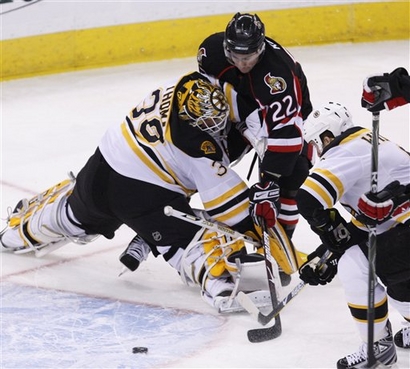 The Bruins were able to escape from Scotiabank Place tonight with 2 points and avoided being the answer to the trivia question "What team did Cory Clouston get his first NHL coaching win against?".

Blake Wheeler got the Bruins on the board in the first period when he camped out at the top of the crease and deflected Andrew Ference's shot past rookie goalie Brian Elliott for a power play goal. At 10:27 of the second period, Zdeno Chara ripped a slap shot from 60 feet out to record his 300th career point and extend the Bruins lead to 2-0. The Senators got one back later in the period when Nick Foligno got Tim Thomas to overcommit before pulling the puck to his backhand and beating Thomas for his 7th goal of the season. Ottawa took advantage of some sloppy defensive zone play by the Bruins in the opening minute of the third to get the equalizer on a wrister by Daniel Alfredsson that beat Thomas on the glove side. With Phil Kessel in the box for delay of game, Jason Spezza scored on the power play to put the Senators up 3-2. At 14:54 of the third period, Antoine Vermette was sent to the box for a high sticking double minor after his stick hit Michael Ryder in the face and drew a significant amount of blood. With Vermette in the sin bin, the Bruins were able to pull even when Chuck Kobasew cleaned up a rebound in front and desposited the puck into the back of the net for his 10th of the season.

The Bruins started the overtime session on the power play thanks to an interference call on Mike Fisher in the full seconds of regulation. Despite several good scoring opportunties, the Bruins weren't able to convert on the 4 on 3 power play. Brian Elliott made several great saves and robbed Dennis Wideman twice on the man advantage. With a little over a minute left in overtime, Tim Thomas saved the game for Bruins when he sprawled to stop Mike Fisher's backhand attempt on a breakaway.

Tim Thomas and Brian Elliott put on a goaltending clinic in the shootout. The first nine shooters failed to find the back of the net. As the 5th shooter for the Bruins, P.J. Axelsson had a chance to a hero. Axelsson took the puck wide to the right wing boards, cut back to the middle then pulled the puck to the backhand and beat Elliott five hole for the game winner.

- The Senator's thrid jerseys might be the lazy jersey design in history.

- It was weird to see Shawn Thornton wearing a shield. Thornton was struck with a puck while sitting on the bench during the final minute of last night's game and needed stitches to close the gash.

- Tim Thomas made some questionable decisions tonight, but came through in the clutch and held down the fort for the B's.

- I don't know how Antoine Vermette wasn't called for holding when he pinned a guy to the ice.

- The Bruins looked very sloppy in the defensive zone in the final minute of regulation.

- Even though the Bruins benefited from the double minor high sticking call, I hate the logic behind the double major high sticking rule. It basically says that an extra 2 minutes are given when a high stick results in an injury. What I hate about this rule is that an inadvertent high stick can cause injury and get 4 minutes (which happened tonight) and a dirty play can get a 2 minute penalty. Also the definition of "injury" is subjective. Everyone thinks that if the player draws blood, then an extra two minute penalty is awarded, but that isn't the case. For a more detailed explanation of the rule, check out my interview with CHL referee Tom Steinel from before the season started.

- Michael Ryder received stitches to close the cut that resulted from the high stick from Vermette.

"We didn't deserve to win. We had luck on our side tonight. We need to play better on Saturday, if we want to win." - P.J. Axelsson