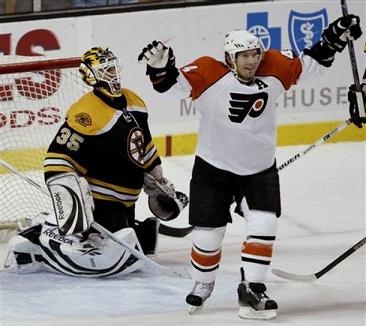 Really? A fluke goal by Randy Jones in overtime with an assist from Scott Hartnell? ...so much for karma.

The Bruins got off to an early 1-0 lead on a Marc Savard wrister at 3:42 of the first period. Simon Gagne scored a power play goal at 14:57 to tie the game at 1-1. With 1:01 left in the first, Byron Bitz put in a rebound for his first career NHL goal. 8 seconds later with Flyers starting goalie Martin Biron still replaying Bitz's goal in his head, Chuck Kobasew beat him five hole with a wrister from the right circle. The Bruins headed into the dressing room up 3-1 after the first period.

The Flyers started the second period with a new goaltender after pulling Martin Biron in favor of Antero Nittymaki. The Flyers seemed to be engerized by the switch in goal and came out with more energy in the second. Former Bruin Glen Metropolit got the Flyers to with one at 2:08 of second period with his second goal of the season. Scott Hartnell knotted the game at 3-3 with a power play goal at 6:25 of the second.

With 1:24 left in the third period, Nittymaki was whistled for delay of game after knocking the puck over the glass with his goal stick. Unfortunately, the man advantage garnered more scoring opportunities for the Flyers, who had two good chances to score a shorthanded goal. The first chance came when Jeff Carter beat Zdeno Chara in a foot race to create a breakaway. As Carter came in all alone on Fernandez, he lost control of the puck and put a shot wide of the net. Moments later with just seconds left in regulation, the Flyers broke in 2 on 1 and Simon Gagne fired a shot that forced Manny Fernandez to make a spectatular glove save to preserve at least a pont for the Bruins.

With the game still tied at 3-3 and 36 seconds left on the penalty to Nittymaki, the teams headed to overtime. Unfortunately, the Bruins couldn't covert with the reamining time on the power play. Dennis Wideman was inches away from winning it for the B's when his shot rang off the post 2:25 into overtime. 35 seconds later Randy Jones flipped a shot from the blueline that drifted well wide of the goal, but bounced off defenseman Andrew Ference and into the net for the game winner.

- Randy Jones was booed everytime he touched the puck today.

- Congratulations to Byron Bitz on his first NHL goal!

- It looked like Manny Fernandez was wearing new pads today. The new pads are white with black trim (his old pads had a splash of gold mixed in). His new neutral color choice will probably cause all sorts of dumb unfounded rumors on the message boards about a possible trade like when the Bruins took down his name plate to welcome Kevin Regan.

- I think if Shawn Thornton wasn't wearing a visor today, he would have tried to find a dance partner in the 2nd or 3rd period. This game needed a fight to swing the momentum for the Bruins and put an end to the chippy play by both teams that was going on.

- Hopefully, Michael Ryder can return to the ice soon after missing today's game with a facial fracture, but that doesn't sound good.

- If the Flyers can figure out their goaltending situation and take less penalties, they could be a force to be reckoned with in the playoffs.

- Not a very good day for Blake Wheeler, who took two bad penalties and tipped the puck in front of the goal that lead to Scott Hartnell's goal.

"[Wheeler] wasn't very good for us tonight," said Julien. "I didn't think Krejci was very good for us either compared to what we're used to seeing. They're no different than anyone else. I've always said that you earn your ice time. I didn't feel those guys were good enough to have the ice time they normally have." - Head Coach Claude Julien

- Is Manny Fernandez not talking to the media or was he just frustrated after the loss? Boston Globe/Boston.com beat reporter Fluto Shinzawa is reporting that Manny Fernandez declined to comment on today's game.