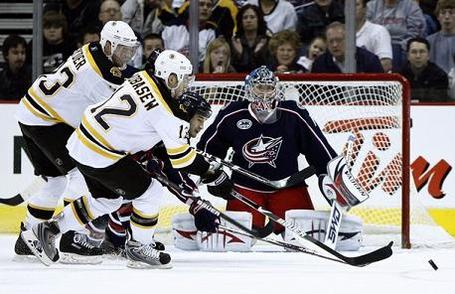 The Bruins dropped a 2-0 decision to the Columbus Blue Jackets tonight in a game that featured some big hits and strong goaltending at both ends of the ice. Rookie goalie Steve Mason turned aside all 35 shots that he faced to record his league-leading 9th shutout of the season. The win was Mason's 27th victory of the season, which ties Marc Denis' Columbus Blue Jackets franchise record for most wins in a season.

It took nearly 47 minutes for either team get on the scoresheet tonight. With Zdeno Chara in the box for a borderline high-sticking call, Raffi Torres fired a wrist shot from the right circle that beat Tim Thomas on the blocker side. With the extra attacker on, the Bruins came inches away from tying up the game late in the third period when Zdeno Chara's shot got past Steve Mason, hit off the goal post, and trickled along the goal line before being cleared out of the crease. The Blue Jackets added a goal in the final minute to seal the victory when Rick Nash's dump in from the opposite blue line found it's way into the empty net.

- Early in the third period, Tim Thomas and Jiri Novotny collided behind the net as Thomas went back to play the puck. During the play, the strap and chin cup of Thomas' mask broke off. Play was halted for several minutes while the Bruins equipment staff worked to repair his mask. Thomas' mask took longer than expected to repair, so he was forced to play much of the third period wearing Manny Fernandez's mask. The mask was eventually repaired and Thomas was able finish the game with all his own equipment. I'm not sure if Thomas wearing an unfamiliar mask played a role in the game-winning goal or not. Thomas does wear a very unusual style of mask and Fernandez's mask probably didn't fit properly, so it may have affected his vision. After the game, Tim Thomas talked about how he doesn't like to wear other goalies' gear, but refused to use that as an excuse for giving up the goal.

- This may sound like a dumb statement but the Bruins goal scorers need to start SCORING GOALS!!!