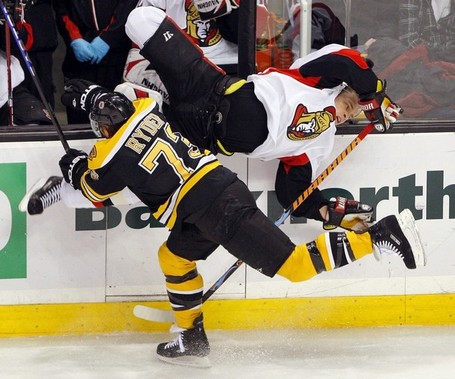 Aaron Ward staked the Bruins to an early 1-0 lead 3:17 into the game when Patrice Bergeron connected on a long pass to Ward who was exiting the penalty box after serving 2 minutes for hooking. Ward took the pass and broke in alone on Alex Auld and wound up for a big slapper from between the circles that found the back of the net. Three and a half minutes later, P.J. Axelsson got his 6th goal of the season after a nifty give and go play with David Krejci. After the second goal, Milan Lucic and Chris Neil squared off and exchanged haymakers at ice center on the ensuing face-off. With 9:36 remaining in the first period, Michael Ryder fed a cross-crease pass to Chuck Kobasew, whose quick snap shot got past Auld for the 3-0 lead. The Sens on the board at 7:12 of the first on Jason Spezza's 20 foot wrist shot.

After a scoreless second period that produced only 11 total shots on goal (Boston 7, Ottawa 4), the action picked up in the third period. 4:31 into the third, Marc Savard's pass created a 2 on 1 for Phil Kessel and Milan Lucic. When the Ottawa defender made the decision to take away the pass, Phil Kessel fired a quick wrister that beat Auld top shelf to extend the Bruins' lead to three. Ottawa got one back 2 minutes and 21 seconds later when Christoph Schubert put the puck in the net after a nice feed from Ryan Shannon. The Senators made it a game at 9:05 of the third when Jason Spezza beat Tim Thomas for his 25th goal of the season and 2nd of the game to make it 4-3. With the Ottawa goal empty and the extra attacker on, Phil Kessel won a foot race to collect the puck in the offensive zone and slide the puck into the vacated net to ice the victory for the Bruins.

- The Bruins needed this win badly. They could have defended their lead better, but in the end they were able to hang on and get the W, and that's all that really matters this time of year.

- Good bout between Milan Lucic and Chris Neil. This was no wrestling match. These guys came out swinging.

After the fight Milan Lucic did his best Beavis "Cornholio" impression. 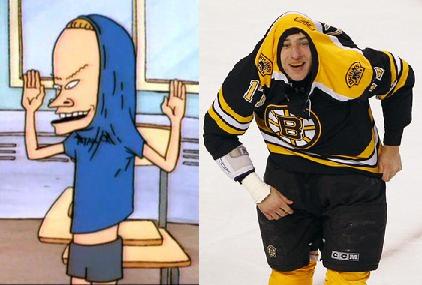 - The Bruins only put 22 shots on goal tonight.