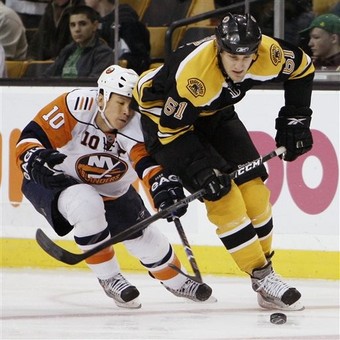 The Bruins jumped out to an early lead and were able to hang on to beat the New York Islanders 2-1 for their 45th win of the season. Tim Thomas turned aside 21 shots to help secure the win for the Bruins and record his 30th victory of season.

Phil Kessel got the Bruins on the board just 3:16 into the game when we pounced on a rebound in front and quickly deposited the puck into a virtually open net for his 30th goal of the season. The Bruins struck again just 1:15 later when Marc Savard ripped a wrister from the slot that beat Islanders netminder Yann Danis for the early 2-0 lead. The Islanders cut the Bruins' lead in half midway through the second period thanks to defenseman Mark Streit's end to end rush. With the B's and Isles skating 4 on 4, Streit skated right up the center of the ice, got Zdeno Chara to over-commit, and beat Tim Thomas up high on the glove side. The Bruins put themselves in some bad situations late in the game with untimely penalties, but the penalty kill was up to the task and kept the Islanders power play off the scoresheet.

- 2 Too Many Men on the Ice penalties in one game is inexcusable at the NHL level.

- Phil Kessel is the first Bruin to score 30 goals in a season since Patrice Bergeron during the 2005-2006 season.

- The Jack on a Stick made an appearance on NESN

- This was not the Bruins' best effort, but they got the win. Now, they need to focus on the Pittsburgh Penguins, a team that has played very well lately.