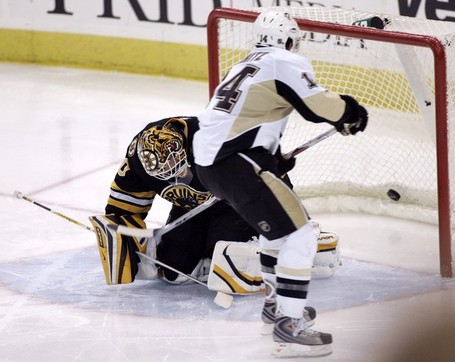 The Bruins fell 6-4 to the Pittsburgh Penguins on the road after the Penguins scored 4 goals in the third period to erase the Bruins' one goal lead heading into the final period. Pittsburgh's newly acquired forward Chris Kunitz led the way for the Penguins by recording his second career hat trick. Kunitz also added an assist to turn in a 4-point game.

The Penguins jumped out to an early lead when Sidney Crosby's feed found Bill Guerin in the slot for a one-timer. The Pens' lead didn't last long. The Bruins got even just 16 seconds later when Mark Recchi deflected Mark Stuart's blast from the point past Mathieu Garon. The B's went up 2-1 midway through the first period when Blake Wheeler made a turn around pass while falling to the ice that found it's way to Phil Kessel, who slapped a backhander into the net for his 31st goal of season. With Penguins on a 5 on 3 power play courtesy of Dennis Wideman (slashing) and Steve Montador (roughing), Chris Kunitz got his first goal of the game at 16:04 when Sidney Crosby's shot deflected off of Kunitz's skate as Tim Thomas sprawled on the ice. The Bruins and Penguins were deadlocked at 2 after the first period.

Blake Wheeler's shorthanded goal 10:31 into the middle frame gave the Bruins a 3-2 lead when Sergei Gonchar overskated the puck behind his own net and David Krejci picked up the puck and dished it out front to Blake Wheeler.

The Bruins took a 3-2 lead into the third period. Pittsburgh quickly erased the Bruins' narrow lead and swung momentum in the home team's favor. With Pittsburgh on the power play and Blake Wheeler in the box for holding, the Penguins got the equalizer 43 seconds into third. Sergei Gonchar fired a shot from the point that drastically changed directions when it was deflected by Chris Kunitz for his second goal of the game. The Penguins got the go-ahead goal just 18 seconds later when Bill Guerin's pass sprung Chris Kunitz for a breakway. Kunitz broke in all alone on Thomas, shook off a hook from Zdeno Chara and beat Thomas on a backhander for his second career hat trick. Michael Ryder pulled the Bruins back to even a minute and 53 seconds later when he picked off a pass in the attacking zone and fired a snap shot from the right face-off circle for a power play goal. The Penguins regained the lead for good at 9:21 when Petr Sykora's shot from the slot beat Tim Thomas for the 5-4 lead. With the goalie off and the extra attacker on, Marc Savard tried to make an ill-advised cross ice pass in the offensive zone from the corner of the rink to the opposite point. Jordan Staal picked off Savard's pass and easily slid the puck in the open net to ice the 6-4 victory for the Penguins.

- There were 13 minor penalties called in this game (Boston 8, Pittsburgh 5) and most of them were ticky-tack calls.

- Chris Kunitz scored 2 out of his 3 goals today by doing nothing more than standing in front of the net.

- The Bruins looked very sloppy in their own end at times today.

- The Bruins looked a lot like a team that was playing on back-to-back days. Of course, they couldn't use that as an excuse because the Penguins also played yesterday.

- Dennis Wideman and Zdeno Chara did not look sharp today. Both Wideman and Chara finished the day -3. Chara was on the ice for all 6 Pittsburgh goals. Wideman had two trips to the sin bin, including an undisciplined slash after the whistle.

- I was somewhat surprised to see Tim Thomas get the start today.

- The Bruins made a special request to the league office prior to the season to wear their third jerseys today. I'm guessing that they probably thought the game was going to be on NBC since NBC only seems to air games involving the Penguins, Red Wings, and Rangers.

- The Bruins aren't going to win many games taking that many penalties and only putting 25 shots on goal.