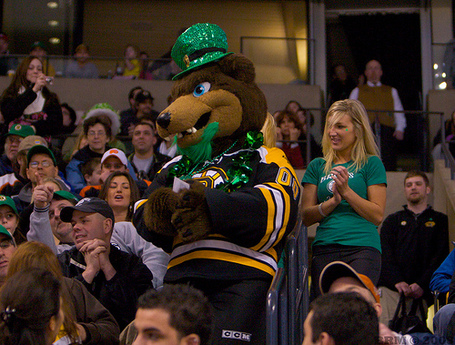 Besides getting arrested for public drunkenness in Southie, I figured the best way to celebrate St. Patrick's Day was to take a look at some Irishmen who have donned the Black & Gold (or in some cases just guys with Irish sounding names).

Terry O'Reilly
O'Reilly was famous for getting his Irish up if anyone tried to pull any shenanigans with his teammates. He spent so much time in the sin bin that he literally owns the Boston Garden penalty box.

Johnny "Pie" McKenzie
McKenzie spent parts of 7 seasons with the B's from 1966 to 1972, winning two Stanley Cups. According to his wikipedia page: A notorious incident took place immediately after the Bruins defeated the Rangers in six games in the Stanley Cup finals in the latter year (winning the clinching game on the Rangers' home ice at Madison Square Garden), McKenzie skated to center ice, raised one arm in a Statue of Liberty pose, placing his other hand around his neck, making a "choke" gesture (alluding to the fact that the result of the series had left the Rangers still looking for their first Stanley Cup championship since 1940), then jumping up and down in a circle several times. This became known as the "McKenzie Choke Dance," or simply the "choke dance." Then again, maybe Brendan Shanahan got to this one too.

Willie O'Ree
OK, so Willie isn't Irish, but he has a name that is straight from the Emerald Isle. On January 18, 1958, O'Ree broke the NHL color barrier by becoming the first black player to play in an NHL game when he suited up for a game against the Montreal Canadiens. Despite being almost completely blind in his right eye after being struck by a puck during a game in juniors, O'Ree was able to reach the highest level of professional hockey. O'Ree played 45 games for the Bruins over the course of two seasons. Those 45 games would be the only games he would ever play in the NHL, however he had a 21 year career playing for several different minor league teams.

Mike O'Connell
Mike O'Connell spent 6 seasons on the Bruins' blue line from 1980 to 1986. He also served as the team's general manager from 2000 until 2006, when he was fired. Many Bruins fans wanted to beat O'Connell with a shillelagh after he traded Joe Thornton to San Jose for a 50 cents on the dollar. Ironically, O'Connell was likely fired in part for signing Tim Thomas to a 3-year extension for $3.3 million.

Mike Sullivan
Mike Sullivan played 77 games for the Bruins during the '97-'98 campaign. The BU product also served as Head Coach of the Bruins from 2003 to 2006. Sully led the B's to a first place finish in the Northeast Division in '03-'04 before being bounced by the Montreal Canadiens in the first round after blowing a 3-1 series lead. After the lockout, Sullivan was left with a roster that was left in shambles after the Bruins let almost every free agent with any discernible talent walk out of town. Sullivan was fired after the '05-'06 season after going 29-37-16.

Peter NcNab
Peter NcNab spent 8 seasons playing for the Bruins. McNab ranks 9th in goals on the Bruins' all-time scoring list and 10th in assists. McNab is known for being the first player to jump into the stands during the now-infamous Madison Square Garden fan brawl.

Kyle McLaren
McLaren played 7 seasons with the Bruins after being drafted in the first round of the 1995 NHL Entry Draft. McLaren made the big club at the age 18. Ironically, the defenseman who never played at the minor league level is now toiling in the AHL after the San Jose Sharks decided to dump his $2.5 million by assigning him to Worcester. Kyle McLaren is supposedly color blind, so St. Patrick's Day is probably an embarrassing day for him.

Marty McSorley
McSorley racked up 3,378 penalty minutes over the course of a 17 year career. McSorley was known as Wayne Gretzky's personal bodyguard on the ice during his time with the Oilers and Kings. McSorley came to Boston during the twilight of his career in 1999. McSorley's time in Boston and his reputation were tarnished after an ugly on-ice incident on February 21, 2000. During the waning seconds of a game against the Vancouver Canucks, McSorley maliciously struck Donald Brashear in the head with his stick. McSorley was suspended for a year by the NHL and sentenced to 18 months of probation by a Canadian court. He never played another game in the NHL.

Don Sweeney
Sweeney was a mainstay on the Bruins' blue line for 15 seasons from 1988 to 2003. He currently serves as the Director of Hockey Operations & Player Development for the Boston Bruins.

Here are a few guys that may or not be Irish but have names that are associated with St. Patrick's Day: