Share All sharing options for: Bruins looking to [insert witty pun] vs. Kings 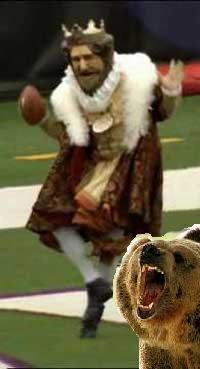 I have 12 hours of sports to watch today. I have no time to write witty headlines.

The Los Angles Kings are in town to take on the Bruins tonight at TD Banknorth Garden. The B's are looking to get back on track after their 3rd period collapse against the Penguins on Sunday. Meanwhile, the Kings are looking to snap a 3 game losing streak (0-2-1).

'08-'09 Season Series
First and only meeting this year

Claude Julien said that Stephane Yelle will be in the lineup tonight, while any changes to the blue line will be a game-time decision. Dennis Wideman took a puck off the knee in the game against Pittsburgh but has practiced all week.

- Tim Thomas will get his 5th straight start tonight.

- If I had the last name Quick, I don't think I would choose a college that calls its athletic teams the Minutemen.

- The Kings have not been very good playing 5 on 5, but they have been fairly strong at special teams play. Both the power play (20%) and the penalty kill (82.6%) are ranked 11th in the NHL.

- For more on the Kings, check out Battle of California

At least the Kings didn't make their goalies wear masks that were essential movie billboards like some other movie mogul that just happens to own an NHL team. What is a kid from West Newbury doing wearing LA Kings gear? Come playoff time, we will probably see this clown at The Garden all decked out in black & gold.