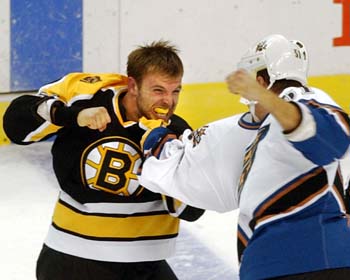 OK, so P.J. Stock isn't so big, but he could swap fists with the biggest, baddest dudes in the league. The undersized scrapper was listed at just 5'10" 197 lbs, but he made up for his lack of size with his energy and willingness to unload a flurry of haymakers on his opponent. Stock played parts of seven seasons in the NHL and in 235 career games racked up 523 penalty minutes. P.J. is best known for his time in Boston, where he spent three seasons with the Black & Gold. During his time in Boston, Stock quickly became a fan favorite for his willingness to drop the gloves and stick up for his teammates. During this time "P.J. Stock Crew Ass Kicker 42" t-shirts became a big seller on Causeway St. Stock appreciated the fans of Boston almost as much as they loved him. At the end of each fight (win or lose), P.J. would give the FleetCenter faithful his trademark wave as he skated to the box. Some would consider P.J. Stock to be a pioneer of the hockey blogosphere. He had a reoccuring column on the Boston Bruins website that chronicled everything from life on the road to movie reviews, long before anyone even knew what a blog was.

Unfortunately, Stock had his career cut short due to an eye injury he sustained during an AHL game during the 2003-2004 season. While playing for the Philadelphia Phantoms while on loan from the Bruins organization, Stock took a high stick to the eye during a game against the Springfield Falcons. The injury caused him to experience double-vision in his right eye and ultimately forced him to hang up his skates for good.

P.J Stock now lives with his wife and children in the Montreal area, where he works as a sports braodcaster for various media outlets including the Team 990, where he hosts "The Stock Exchange". He is also a studio analyst for CBC's Hockey Night in Canada, where he gave out Mike Milbury's cell phone number during a recent broadcast (see video below).