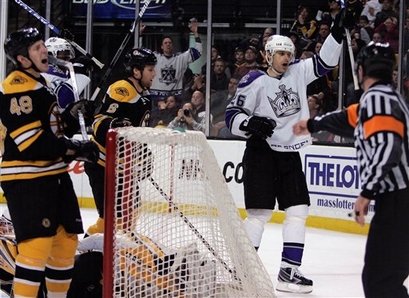 Up 2-0 midway through the third period, the Bruins looked poised to become the first team in the Eastern Conference to clinch a playoff spot until the Kings erased Boston's lead late in the period and forced overtime. Dustin Brown would net the game winner for the Kings in the extra session. The Bruins collected a point in the 3-2 overtime loss to reach the 100 point mark for the season but will have to wait for another day to punch their ticket to the postseason.

The Bruins came out of the gate hard and tried to take the game to the Kings early by utilizing an aggressive forecheck and testing the Kings' young goaltender Jonathan Quick with quality shots. Quick made some great saves early in the game including an impressive glove save to rob Blake Wheeler's breakaway bid. The Bruins were able to eventually beat Quick 14:41 into the game when Michael Ryder set up behind the net and dished the puck out front to Matt Hunwick, who fired a quick shot from the slot for the game's first tally.

The Bruins extended their lead to 2-0 at 3:48 of the second period on a goal from Mark Recchi. Chuck Kobasew gained possession of the puck on the forecheck behind the Kings' goal, which drew two LA defenders to collapse on the puck. Kobasew quickly passed the puck to Patrice Bergeron in front of the goal, who alertly slid the puck to his left to a wide open Mark Recchi. With Quick caught out of position, Recchi had a lot of goal to work with and he buried the puck in the back of the net for his 17th goal of the season. The physical play picked up in the period as both teams started to throw their weight around. The Kings out-shot the B's 13-9 in the middle frame and Tim Thomas was called upon to make some big saves. Thomas made a great glove save with 53 seconds left in the second to keep Teddy Purcell off the scoresheet. Before the teams headed off the ice for the second intermission, there was some pushing and shoving after the whistle but cooler heads prevailed and both teams filed off to their dressing rooms for the break.

The Kings continued to pepper Thomas with shots in the third period while the Bruins appeared to be sitting back trying to simply hold on to the lead. With 12 minutes remaining in the third period, Aaron Ward was sent off for hooking. With 10 seconds left on the penalty to Ward, Los Angeles converted on the power play on a backhander by Michal Handzus, who picked up a rebound along the goalline next to the net. The Bruins were looking for an insurance goal late in the third when the Kings gained control of puck and turned a Bruins attack into an odd man rush going the other way. Drew Doughty found a rebound from Wayne Simmonds' shot just lying in the crease and Doughty tapped the puck in for the gift-wrapped goal with 1:36 remaining in the third period.

Deadlocked at 2-2 after 60 minutes of play, the teams headed to overtime. The Bruins failed to even muster a shot on goal in the overtime period. Dustin Brown would seal the win for the Kings with 35 seconds left in overtime when he put home a rebound in front of the net.

- The Bruins were 0-4 on the power play and registered just 5 shots with the man advantage.

- All three LA goals came off of rebounds in front. Admittedly, Thomas doesn't have the best rebound control but the guys in front of him can't make it that easy for the other team pick up loose pucks in front of the net.

- The Bruins will need to turn in a better effort for the whole game on Sunday if they want to have a chance at beating the red hot New Jersey Devils.

- Patrice Bergeron was 11 for 15 in the face-off circle tonight.