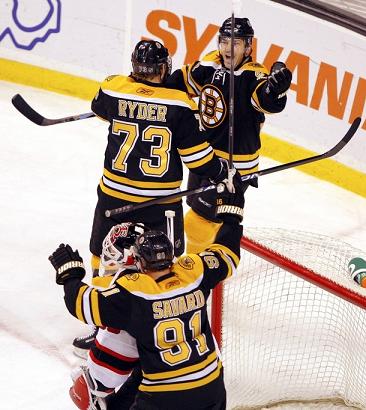 The Bruins beat the New Jersey Devils 4-1 to claim the Northeast Division title for the first time since the '03-'04 season and extend their lead in the Eastern Conference to 5 points.

The Bruins struck first on the power play 16:22 into the game when Mark Recchi's centering pass deflected off of Michael Ryder's stick before caroming off of New Jersey defenseman Paul Martin's skate past goaltender Martin Brodeur.

The B's extended their lead to 2-0 1:52 into the second period when Chuck Kobasew took the puck from behind the Devil's goal, skated out front and threw a backhander on frame that some how found its way into the back of the net. The Bruins were able to convert on the power play once again at 6:19 of the middle frame. With Bobby Holik in the box for roughing, Marc Savard picked up a rebound off of a Matt Hunwick shot at the right wing circle and fired a wrister past Brodeur, who was caught out of position when the puck took a strange hop on the rebound. The Devils got on the scoresheet just over 6 minutes later when Jamie Langenbrunner found Andy Green driving to the net. Milan Lucic recorded his 14th goal of season with 2:34 left in the second period when his weak backhander found it's way past Martin Brodeur for a 4-1 Boston lead.

The Bruins looked like they were back on their heels in the third period. The Bruins were out-shot 17-3 in the third period but the Bruins were able to keep the Devils off the board in the third, thanks in part to some solid goaltending from Tim Thomas (41 saves today). Tempers flared late in the game when Zdeno Chara and David Clarkson starting chirping at each each other. With an official separating the two players, Clarkson tried to throw a punch at Chara, which was quickly returned by the long-armed defenseman. Both players were give unsportsmanlike conduct minors at 19:56.

- The Bruins got the win today, but they still need to play 60 minutes of hockey. You can't get outplayed like that in the third period and expect to win games. Fortunately, they had a 3 goal cushion and some solid goaltending from Tim Thomas.

- Phil Kessel actually hit someone and recorded his 6th hit of the season.

- Milan Lucic scored a goal after a 15-game drought.

- The special teams units got the job done for the Bruins tonight. The power play went 2 for 4, while the PK forced the Devils to go 0 for 5 on the man advantage.