Big Men on Campus: A look at the Bruins' college prospects

Share All sharing options for: Big Men on Campus: A look at the Bruins' college prospects 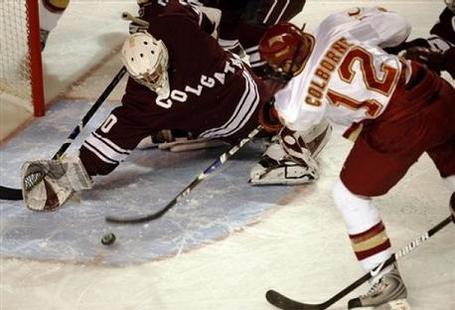 Several of the Bruins prospects spent this year honing their skills at the collegiate level. Here is a look at how the Bruins' college boys did this season. 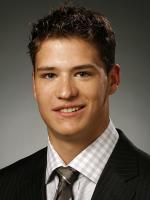 Joe Colborne is currently Denver's fourth highest point-producer (9 G, 21 A, 30 Pts). The Bruins' 1st round pick was recently named to the All-WCHA Rookie Team. Joe Colborne's name was bounced around in several trade rumors leading up to the trade deadline but at 3:00 PM Eastern on deadline day, the Bruins still owned his draft rights. Colborne has bragging rights among the B's prospects as the only one to qualify for the NCAA tournament this season. Denver (23-11-5) received the #1 seed in the West Region of the NCAA tournament. The Pioneers are scheduled to take on Miami (20-12-5) in the first round on Friday afternoon in Minneapolis.

I think that when the Bruins drafted Joe Colborne last summer, they expected that it would be a few years before he was ready to contribute to the big club. When he first got to Denver, it was clear that he was talented, but that he wasn’t all that polished as a player. But he took some pretty positive steps in his development over the course of the season that I’m sure the Bruins have to be happy about.

The big change that Colborne made this year was that about halfway through the year, Denver started playing him at center. First it was just a couple games at a time, but by the end of the season, he had made the move to center full-time, and a lot of people thought he looked better at center than he did on the wing. His face-off numbers were fairly average (47.5%), but playing center at the college level requires a lot of defensive responsibility, so the fact that he was able make that move says his coaching staff was starting to trust him a little more.

He’s still getting used to the physical aspects of the game, and another year or two of putting on some muscle will really benefit him, but he’s got tremendous playmaking ability and skates very well for his size. He kind of reminds me of Blake Wheeler when Wheeler was younger—though Wheeler was more of a natural goal-scorer, while Colborne is better at passing the puck. Wheeler was tremendously skilled, but played on the perimeter too much. He had to learn to be more physical and use his size along with his skills. That’s about where Colborne is, but he’s starting to get better. I’d expect Colborne to spend another year, maybe two, at Denver, before he signs with the Bruins.

Bradford led the Eagles in both goals (25) and points (42) this season. The under-sized senior was named to the Hockey East All-Stars Second Team. After winning the National Championship last season, BC failed to qualify for the NCAA tourney for the first time the '01-'02 season. Bradford finished his four year career at The Heights with 110 points (53 G, 57 A).

Tommy Cross appeared in 24 games for Boston College this season and collected 8 assists.

Tremblay recorded 11 points (4 G, 7 A) in 36 games in his freshman season at Clarkson. Although he only found the back of the net four times this season, Tremblay proved he can be counted on to come through in the clutch as 3 of his 4 goals were game-winners.

Alain Goulet started the year at the University of Nebraska-Omaha, but dropped out of school midway through the season to join the Gatineau Olympiques of the Quebec Major Junior Hockey League. In 17 games this season at Nebraska-Omaha, Goulet was a +9 and contributed 5 points (2 G, 3 A). Since joining the Olympiques, Goulet has been a +21 and has averaged better than a point a game. In 32 games with Gatineau, Goulet has 35 points (16 G, 19 A). Note to Alain: Identifying your favorite team as the Montreal Canadiens after being drafted by the Bruins might not be the best way to win over B's fans. Although, he might fit in well at Fenway Park. He did say that if he tried out for American Idol he would sing "Sweet Caroline".

The Bruins' 7th round pick in 2008, Mark Goggin has signed a letter of intent to play for Dartmouth next fall.