Shameless Self-Promotion Round 2: A Call to Arms to All Yankee Haters

Share All sharing options for: Shameless Self-Promotion Round 2: A Call to Arms to All Yankee Haters

Stanley Cup of Chowder has advanced to the 2nd round of Zoner Sports "Best Sports Blog Name" contest. This round I am up against 3:10 to Joba, a site named after the tubby Yankees pitcher in the cowardly lion costume pictured below. 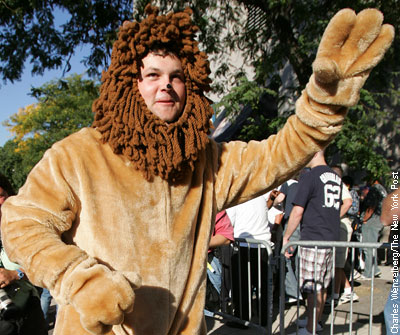 I wasn't going to promote this second round match-up on the front page, but since 3:10 to Joba went and turned it into a Boston-New York rivalry thing, I had to respond.

"We're up against a hockey blog called Stanley Cup of Chowder this time, so if we were to lose, at least we can say it was to a manly sport and not some mincy game like soccer. It is a Boston Bruins blog though, so get your rivalry engines warmed up and delve into that Boston hate to advance us again."

So whether you hate the Yankees or just think Stanley Cup of Chowder is a far more superior name than 3:10 to Joba, head over to Zoner Sports and VOTE.