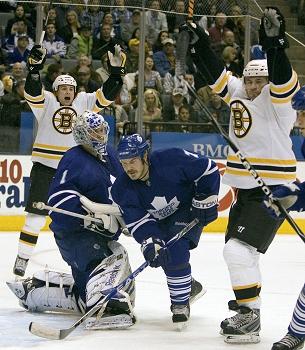 Despite looking very rusty at times after nearly a week off, the Bruins were able to out-gun the Maple Leafs 7-5. Chuck Kobasew, Michael Ryder, Mark Recchi (2 goals), Shawn Thornton, David Krejci, and Blake Wheeler all found the back of the net tonight. Nikolai kulemin, John Mitchell, Alexei Ponikarovsky (2 goals), and Niklas hagman were the goal scorers for the Leafs.

I didn't want to write a complete recap and I doubt you wanted to read my description of all 12 goals either. I decided to do something different tonight*.

*By different, I mean lazy and uninspired

Tonight's Game by The Numbers

69 combined number of shots on goal

5 number of times that Aaron Ward turned the puck over

1/8 Manny Fernandez got his first win since January 8th

6 Shawn Thornton scored his 6th goal of the season

23 No your eyes were not deceiving you, that was Steve Montador playing forward

1 Goaltending change: Justin Pogge was replaced by Curtis Joesph after giving up 6 goals

Bruins are back on the ice tomorrow night in Philly for an odd 7:00 Eastern Sunday night puck drop.