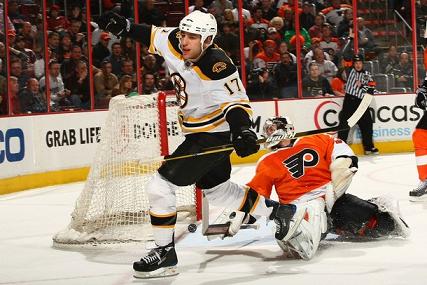 The Bruins were able to outlast the Flyers for a 4-3 victory in a hard fought game that featured the playoff-like intensity that we have come to expect when the B's and Flyers meet up.

Claude Giroux staked the Flyers to a 1-0 lead 4:56 into the game when he put back a rebound from an Aaron Asham shot. Looking to swing the momentum after giving up the early goal, Steve Montador dropped the gloves and traded punches with Philly tough guy Daniel Carcillo. Carcillo scored the unanimous decision, but Monty's willingness to drop 'em with one of one of the league's most prolific pugilists seemed to light a fire under his team. Milan Lucic tied it up just over 5 and a half minutes later when Lucic finished off a pass from Michael Ryder on a 2 on 1 break. The Bruins pulled ahead 2-1 with 6:05 left in the first period on a 5 on 3 power play goal off a hard snap shot from the high slot by Dennis Wideman. The Bruins would get one more tally in the first period with 2:06 left on the clock as David Krejci and Milan Lucic broke in 2 on 1 and Milan Lucic found the back of the net for his second goal on the night.

The Flyers forced Tim Thomas (45 saves) to make some big saves in the middle period including an amazing diving blocker save to rob Scott Hartnell with 6 seconds left on a 5 on 3 Philadelphia power play. The Flyers would eventually crack Thomas in the second when Mike Richards deflected Ryan Parent's blast from the blue line past Thomas to cut the Bruins' lead in half.

The Bruins got the lead back to 2 when Chuck Kobasew's shot from the right wing created a fat rebound that found its way on to Mark Recchi's stick as he was driving hard to the net. Recchi's quick shot from the top of the crease beat Antero Nittymaki for his 20th goal of the season. Tempers flared midway through the period during a scrum near Thomas' net. Andrew Ference looked like Ralphie from "Christmas Story" taking on the bully as exchanged a few punches with Scott Hartnell and quickly wrestled the Sideshow Bob look-alike to the ice as every New England hockey fan grinned from ear to ear*. Down two goals late in the third period, Flyers head coach John Stevens summoned Nittymaki to the bench and sent on the extra attacker. With six skaters on the ice, Philadelphia aggressively attacked the Boston goal and got back to within one goal with 1:21 left in regulation when Simon Gagne put home the rebound from a Braydon Coburn shot.

*Yes, that was two pop culture references in the same sentence.

- In my opinion, the Bruins played a full 60 minutes of hockey tonight for first time in weeks.

- I have been trying to lay off on the Jack Edwards bashing lately, but I think this one deserves mentioning. During the second period, Milan Lucic buried Randy Jones against the endboards. Lucic easily could have been called for a boarding penalty on the play but no penalty was called. Edwards started laughing at the irony of it being Randy Jones getting hit from behind while the Philly crowd pleaded for a call. For those of you that are just jumping on the Bruins bandwagon now, here is a little history lesson for you: Randy Jones is the man responsible for the hit on Patrice Bergeron that caused Bergeron to miss most of the '07-'08 season due to the lingering effects of a concussion. I understand that Randy Jones was the guy that injured Patrice Bergeron and all, but it was almost 2 years ago now and Jones has publicly taken responsibility for the hit. Lucic's check was a dangerous hit that could have easily resulted in a serious injury. If the NHL wants to clean up the game and get rid of dangerous hits, they cannot have their announcers glorifying them. There is a fine line between being a homer and being an unprofessional clown and Edwards has teetered on that line all season.

- The Bruins are still giving up too many shots (48 shots tonight).

OK, let's take a look at the fights: