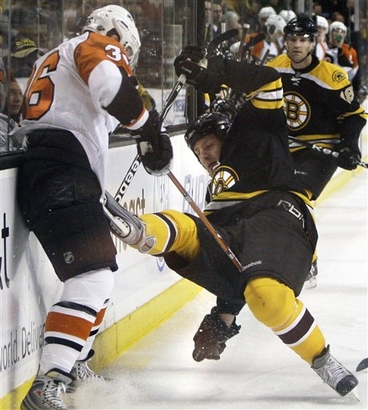 The Bruins fell to the Philadelphia Flyers 4-2 on home ice. Patrice Bergeron started the scoring for the B's on the power play when his one-timer from the left circle beat Antero Nittymaki with 5:35 left in the first period. The Flyers evened the score at 1-1 early in the second period when Scottie Upshall picked off a Marc Savard pass and found the back of the net. The teams heading into the dressing rooms for the second intermission still knotted up at 1-1. The Flyers jumped out to a quick lead in third thanks to Simon Gagne's deflection of Andrew Alberts' shot from the point at 2:22 of the period. The Flyers went up by two a little over three minutes later when Simon Gagne found Mike Knuble in the slot. Somewhere Bob Lobel is screaming at his TV saying "Why can't we get players like that?". Simon Gagne made it 4-1 on the power play with 3:34 left in the third when he beat a sprawling Manny Fernandez. With the B's on the power play late in the game, Claude Julien sent out the 4th line and the 3rd defense pair to act as the power play unit (presumably sending a message to his team). The makeshift power play unit managed to get the game back to within two when Stephane Yelle deflected Mark Stuart's wrister past Nittymaki.

- Zdeno Chara and Aaron Ward were both -3 on the night.

- Mike Knuble played in his 800th career NHL game tonight and finished with a goal and 2 assists and was a +3 on the night.

- I don't normally like seeing Chara in the box for 4 minutes, but someone had to teach Scott Hartnell a lesson. Hartnell is one of those guys that plays on the edge but never seems to be accountable for his actions on the ice. Tonight alone, Hartnell ran Byron Bitz from behind during a scrum in front of the Philly net and left his feet on blindside hit on Michael Ryder. Apparently, Hartnell didn't learn his lesson because just a couple of shifts after taking a fist full of leather to the face from Big Z, he ran Michael Ryder face first into the dasher right in front of the bench. 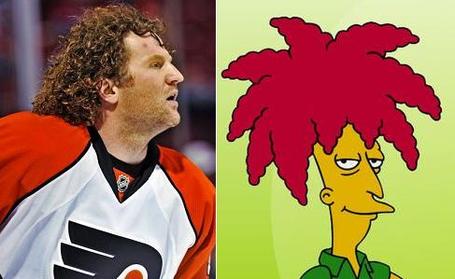 PROGRAMMING NOTE:
Stanley Cup of Chowder and SB Nation Hockey will keep you up to date on all the trade deadline wheeling and dealing tomorrow. Hopefully you came down with a well-timed case of the flu so you can join me for what is shaking up to be an exciting day. I will have an open thread going all day starting at 8:00 AM Eastern and continue on past the NHL trade deadline at 3:00 PM. I will post the trades that happen throughout the NHL on the open thread where you can chime in with your opinions. I will also try to stay in contact with Bruins beat writer James Murphy to find out what he is hearing throughout the day. If the Bruins make a deal, I will post a reaction to the move shortly after the deal is announced. I hope you can all join me for Hockey X-mas. Will the B's get what they asked for this year?