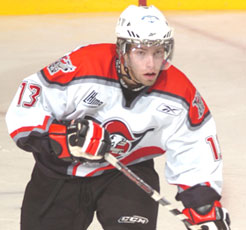 The Bruins have signed undrafted free agent Yannick Riendeau to a 3-year entry level contract. The 20 year old forward spent this season with the Drummondville Voltigeurs of the Quebec Major Junior Hockey League as an overage player. Riendeau lead the QMJHL this season in goals (58), assists (68), and points (126). In a four game playoff series against the Lewiston MAINEiacs, Reindeau recorded 19 points (9-10-19).

From what I have gathered, Riendeau has great hands and passing ability. The major knocks on him seem to be his skating ability and lack of size. The Bruins obviously see something in this kid that 29 other teams didn't.

"He’s incredible, for me it’s been ten years in this league for me; I’ve coached (Mike) Ribeiro, (Derek) Brassard, and (Sidney) Crosby. He’s the second best total package behind Crosby."