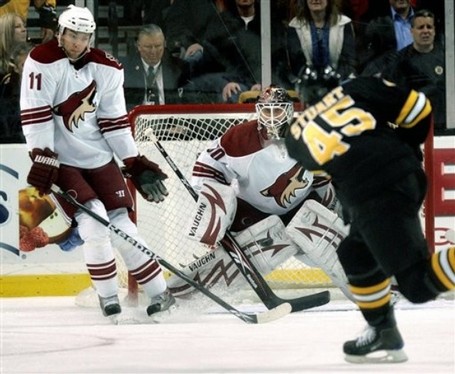 The new look Phoenix Coyotes came to Boston and spoiled the Bruin debuts of Mark Recchi and Steve Montador as the Bruins fell 2-1. Chuck Kobasew got the Bruins out to a 1-0 lead 7:09 into the game when his wrister beat Ilyla Bryzgalov, who was screened by P.J. Axelsson. With Zdeno Chara in the box for interference, Joakim Lindstrom stripped the puck from Dennis Wideman and slide a pass to newly-acquired winger Scottie Upshall, whose backhander found the back of the net for the equalizer at 12:01 of the first period. The Coyotes went up 2-1 with 12:08 left in the second period when new 'Yote Nigel Dawes' centering pass connected with Steven Reinprecht, who fired a one-timer passed Tim Thomas. The Bruins came out with a lot of energy in the third period and controlled play throughout the final stanza, but it proved to be too little, too late. Coyotes goaltender Ilya Bryzgalov turned aside 25 shots to secure the win for Phoenix.

- I loved the intensity in the thrid period. The Bruins really controlled the play in the third, as most of the action was in the Phoenix end of the rink. The B's outshot the Coyotes 11-4 in the third, but they could not seem to crack Bryzgalov.

- Milan Lucic was all over the place making plays in the third period. He was credited with 6 hits on the night.

- I thought that both of the new guys played fairly well tonight. Mark Recchi had a few big hits and seemed to be getting to the right places on the ice. It looked like he had a good scoring chance in the first period, but passed up the shot. Steve Montador looked pretty sharp on the blue line and looks to be a guy that can make that first pass on the breakout.

- I thought Dennis Wideman had an off night tonight. Wideman took 8 shots tonight; 2 were on goal, 4 missed the net, and 2 were blocked. He turned the puck over several times and got caught out of position a couple times. He has the habit of sometimes getting caught too deep in the offensive zone. There are very few occasions when I want to see Dennis Wideman with the puck below the goal line in the offensive zone.

- It is frustrating that the Bruins had almost killed off the penalty to Chara when Phoenix converted on the power play (one second remaining on interference minor).