Share All sharing options for: Bruins set for Original 6 Showdown with Blackhawks 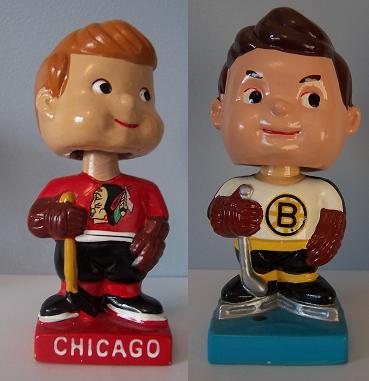 The Bruins will look to snap a 3-game losing streak this afternoon when they welcome the Chicago Blackhawks to the TD Banknorth Garden. Chicago enters today's game having won their last two contests.

- Steve Montador sat out yesterday's practice with flu-like symptoms. He will likely sit out today's game.

- I would expect to see Tim Thomas in goal again today.

- Whoever does start in goal for the B's will likely see a lot of vulcanized rubber. The Blackhawks average 33.2 shots on goal per game. In their last five games, Chicago has averaged 39.4 shots on goal.

- One area where the Bruins have an edge in this game is in the face-off circle. The Blackhawks rank 28th in the league at the dot (47.1%).

- For more on the Blackhawks, check out Second City Hockey...even though they think our fair city is a "shithole"

Pick the First Bruin to Score Challenge
Submit your pick for who you think will be the first Bruin to score a goal today by leaving a comment . No one correctly predicted Chuck Kobasew as the first goal scorer last game.