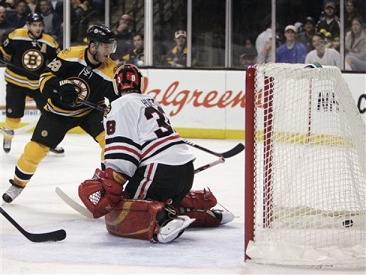 Mark Recchi taught some of the NHL's brightest young stars a firsthand lesson this afternoon at the TD Banknorth Garden: good things happen when you go to the net. The newly acquired 41-year old winger led the way for the B's with 2 goals in the Bruin's 5-3 victory over the visiting Chicago Blackhawks.

The Bruins jumped out to a 1-0 lead midway through the first period when Chuck Kobasew slid a backhand pass to Mark Rechi, who received the puck at the doorstep and beat Cristobal Huet for his first goal as a member of the Boston Bruins. After outplaying the Blackhawks in almost every facet of the game during the period, the B's headed off the ice for the first intermission, up 1-0 and out-shooting the Hawks 15-7.

The Blackhawks tied the game at 1-1 at 15:11 of the second on a power play tally from Jonathan Toews. Toews' wrap around attempt took a strange hop off the skate of Aaron Ward and ended up over Tim Thomas' shoulder and into the back of the Boston goal. The Bruins quickly regained the lead 30 seconds later when David Krejci's shot from the left side of the goal somehow found it's way between Huet's right skate and the goal post. The Bruins found the back of the net once again just 35 seconds later when Mark Recchi tipped in Dennis Wideman's shot for his second goal of the game (15th of the season).

Early in the third period, Chicago defenseman Brian Campbell was carrying the puck through the neutral zone, lost an edge and fell to the ice. With Campbell sprawled on the ice, Milan Lucic picked up the puck and made a crisp pass to Marc Savard, who found Phil Kessel charging to the net for the 4-1 lead. Former Providence Bruin Kris Versteeg got the Blackhawks back within two at 10:26 of the third period when his top shelf wrister beat a diving Tim Thomas. With Andrew Ference off for interference, Patrick Kane pulled Chicago to within one with a half slapper from the top of the left circle with 5:26 remaining in regulation. Late in the period, the Blackhawks pulled their goaltender in favor of an extra attacker. With the Chicago net empty, P.J. Axelsson made a great play at center ice to gather the puck and slide it into the unoccupied goal for his 5th goal of the season (3rd empty net goal).

Tim Thomas made 32 saves today, including a few spectacular recoveries to keep the puck out of the net. At the other end of the ice, Cristobal Huet stopped 34 of the 38 shots he faced.

- P.J. Axelsson is now one goal behind the NHL leaders for empty net goals (3 players tied with 4 ENGs).

- Dennis Wideman was a plus-4 today.

- Blake Wheeler has a healthy scratch today for the first time in his young NHL career. Claude Julien obviously has not been happy with Wheeler's play lately and wanted to send a message to the young winger. Defenseman Matt Hunwick skated once again as a winger today in place of Blake Wheeler.

- Former Bruin Pascal Pelletier was called up from the Rockford IceHogs this week. Today he played in his second game of the season for the Blackhawks. Pelletier saw 9:34 of ice time today and was a minus-1 on the day.

- The Bruins played very well at even strength today, but struggled with special teams play. The B's could not convert on three power play opportunities and only killed off one of Chicago's three power play chances.