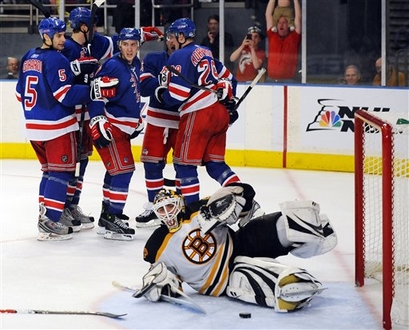 A few flukey goals and some shaky goaltending from Manny Fernandez seemed to be the difference this afternoon as the New Rangers beat the Bruins 4-3 at Madison Square Garden.

It looked like it was going to be a defensive battle, after the Bruins and Rangers headed into the first intermission scoreless after a heavy-hitting first period. The Rangers struck first in the action-packed second period when newly acquired forward Nik Antropov found the back of the net on a nifty give and go play set up by Chris Drury and Wade Redden 3:01 into the period. Chuck Kobasew got the Bruins back to even 2 minutes later when Zdeno Chara created a turnover and sprung Chuck Kobasew for a breakaway. Kobasew broke in all alone, faked a shot on the forehand with a leg kick, before quickly switching to the backhand and tucking the puck past Henrik Lundqvist. Off the ensuing face-off following Kobasew's goal, Shawn Thornton and Rangers tough guy Colton Orr dropped the gloves and squared off. During the bout, Orr's jersey came free from it's fight strap, prompting the consummate professional Shawn Thornton to call in the linesman to step in to stop the fight. The Rangers regained the lead a little over 7 minutes later when Scott Gomez hammered home a power play goal off a tough angle shot from the goal line that somehow snuck in between the post and Manny Fernandez's left skate (a goal very reminiscent of David Krejci's goal yesterday against the Blackhawks). With 3:34 remaining in the middle period, Ryan Callahan put the Rangers up by two when Manny Fernadez had trouble locating the puck while looking like a dog chasing his own tail. Late in the period, David Krejci laid a questionable blindside hit on Chris Drury, who has in a vulnerable position. Drury responded by tracking down Krejci and jumping him. Both players dropped the gloves and quickly tumbled to the ice. Drury and Krejci were both given double minors for roughing.

The Bruins started the third period with a 4 minute power play as a result of a high sticking call on Dan Girardi in the final seconds of the third period. However, the power play was quickly nullified by an untimely hooking call on Chuck Kobasew. With the Bruins and Rangers now skating 4 on 4, Chara fired a heavy slap shot from the point that beat Henrik Lundqvist to get the B's back to with in one. The Bruins got the equalizer a little over a minute and a half later, with Kobasew out of the box and Giradi still serving the back half of his double minor, when Marc Savard's centering pass found Michael Ryder, who fired a wrister past Lundqvist. Nikolai Zherdev got what proved to be the game-winner for the Rangers with 6:22 remaining in the third period when Manny Fernandez misplayed a shot that caromed off the end bounds and Zherdev deposited the rebound into the empty net as the sprawling Fernandez tried to get into a position to make the save. The Bruins had an opportunity to tie the game when Sean Avery was whistled for interference with just 1:22 left in regulation. However, the Bruins could not manage to convert on the power play with the goaltender pulled and the extra attacker on.

- Manny Fernandez looked lost at times today. The first Rangers goal was a legitimate goal that was set up by crisp passes and traffic in front of the net, but I think Fernandez played a big role in the other three goals. All three of those goals could be classified as soft goals.

- That was a classy move by Shawn Thornton to ask the linesman to stop the fight after Colton Orr's jersey came loose from his fight strap. This was a great example of when "The Code" works. If I were in a fight with Orr, I would ask someone to stop it too, but that would be out of fear for my life.

- I have no problem with the way that Chris Drury responded to David Krejci's hit.

- As much as I liked the Fernandez/Thomas tandem, the past few weeks have shown that it is time for Thomas to get the bulk of the workload. I don't blame Claude Julien for starting Fernandez today because I would have done the same thing with two games less than 24 hours apart.

- After watching today's game, I have no doubt that Nik Antropov would have been a great addition to the Bruins at the deadline.