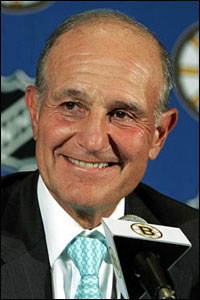 According to a source close to the team, Bruins owner Jeremy Jacobs is planning on selling the team in the off season. Jacobs plans to purchase an ownership stake in his hometown Buffalo Bills. Jacobs recently met with a group of New England investors led by automotive mogul Ernie Boch Jr. to discuss selling his majority ownership of the Bruins to Boch's group of investors. Negotiations are ongoing and there is no word on whether or not Jacobs' Delaware North Companies would retain ownership of the TD Banknorth Garden. Jeremy Jacobs purchased the Bruins in 1975 for $10 million. According to Forbes, the Boston Bruins franchise is currently worth an estimated $263 million. There has been no word on how much the proposed deal is worth.