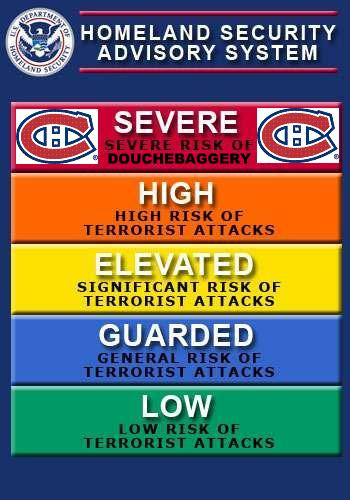 ATTENTION RESIDENTS OF BOSTON: THE THREAT LEVEL HAS BEEN HEIGHTENED TO BLEU, BLANC ET ROUGE

Please do not be alarmed by the influx of flag waving, chanting Quebecois roaming the streets of our fair city. We are not under attack from the People's Republic of Quebec. They are simply here to support their cowardly, dishonorable hockey heroes in an vain attempt to upset the #1 seed in the Eastern Conference and salvage the train wreck known as the Centennial Celebration. Although these individuals are mostly harmless clowns in Euro Trash clothing, city officials have issued some precautions. Women are warned not to leave their handbags unattended. Retailers are being warned to stock up on Ed Hardy bedazzled t-shirts, Celine Dion CDs, and mega hold gel. Police have also been instructed to carry extra fire extinguishers in their patrol vehicles as an added precaution in the unforeseeable event that the Habs win the series. Scalpers on Causeway Street have been instructed to charge no less than 3 times face value to anyone wearing a Habs jersey or anyone with the slightest hint of a French-Canadian accent not wearing a Bergeron #37 or Bourque #77 jersey. The City of Boston has been in close communication with TSA officials and U.S Customs & Border Protection to ensure that most of these Habs fans are not granted access to the United States, however it is inevitable that some will pass through our borders and reach the City of Boston. There is reliable intelligence that the Northern regions of Vermont are even harboring these supporters of Les Habitants. Go about your normal daily routine but be vigilant.

As much as I joke around about Habs fans and the rivalry between Boston and Montreal, the reality is that it is just a game. We are all passionate about the sport of hockey and the team that we support, but that passion should not lead you to resort to violent attacks. The violence belongs on the ice, not the stands. Boston sports fans have gained somewhat of a bad reputation in recent years. Let's try to keep it classy this year. Cheer hard for the B's and make The Garden a building that visiting teams don't want to play in but keep it classy. That means no urinating on the balcony and no starting fights in the stands. Also, think of something more original than "You're gay!" and please do not boo the Canadian National Anthem. These actions by a small group of fans tarnishes the reputation of one of the most storied franchises in the NHL and city of Boston as a whole....and most importantly it subjects us all to the ridiculous one beer at a time limit during B's-Habs games.