Share All sharing options for: Bruins call up Adam Courchaine 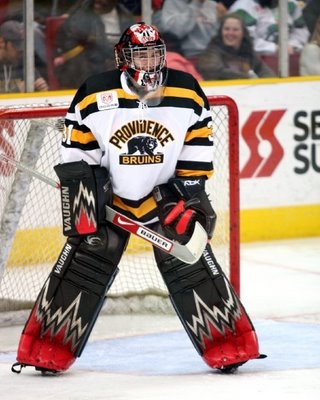 The Bruins announced today that they have called up goaltender Adam Courchaine from the Providence Bruins. Courchaine spent most of the year with his junior team, the Ottawa 67's of the OHL. He finished the OHL season with a record of 13-11-2 to go along with a 3.28 GAA. He has appeared in one game for the Baby B's this season.

I wouldn't read too much into this call up. I think Claude Julien was just giving Tim Thomas the day off and needed an extra puckstopper for today's practice. If there was a real issue regarding Tim Thomas, I would think that Tuukka Rask would have gotten the nod, not a kid who has only played in four AHL games.