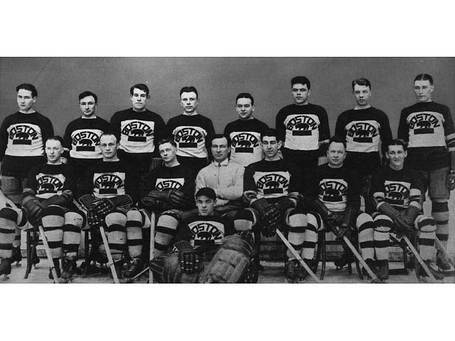 The Boston Bruins are looking to achieve the same goal as the 1928-29: win the Stanley Cup. That year the Bruins defeated the New York Rangers 2-0 in a best of 3 series to win their first Stanley Cup. The series marked the first time that the Stanley Cup Finals involved two American teams. While the game of hockey has changed dramatically over the course of the last 80 years, there are some striking similarities between the '08-'09 team and the '28-'29 squad.

Both teams swept the Montreal Canadiens in the first round

'28-'29: The way that the playoffs worked that year was that the team with the best  record in the American Division played the team with the best record in the Canadien Division in the first round with the winner advancing to the Stanley Cup Finals. The two second place finishers played each and the two third place teams played each other as well. The winners of the 2 vs. 2 and 3 vs. 3 series faced off to see who would play the winner of the 1 vs. 1 series.The Bruins won the best of 5 series against the Habs in 3 games.

Both teams had a goaltender with the initials T.T. who made a name for himself

'28-'29: 25 year old rookie Cecil "Tiny" Thompson played every game in goal for the Bruins in '28-'29. Thompson led the league with 26 wins and had the second best GAA at 1.15. While the NHL was still a low scoring league (NHL total goals per game average: 2.92), Thompson's numbers are still impressive. Thompson only allowed 3 goals in 5 playoffs games.

'28-'29: The NHL changed its rules prior to the start of the '28-'29 season in order to create more offense by allowing players to make forward passes in the offensive zone. Despite this new rule, the Bruins were able to improve in their own end of the rink during the '28-'29 season. The B's had given up 89 goals in 44 games the previous season and gave up only 52 goals  in '28-'29. Interestingly, goals per game league-wide plummeted in '28-'29. Average goals per game went from 3.80 during the '27-'28 season to 2.92 in '28-'29. Most hockey historians credit the strong goaltending throughout the league for this sharp decline in offense.

'08-'09: Like most Claude Julien coached teams, the Bruins play with the philosophy that solid defense will create offense. The Bruins won the Jennings Trophy this season for allowing the fewest goals against (196).

Both teams had a dominant defenseman

'28-'29: Hall of Famer Eddie Shore patrolled the blue line for the B's during the '28-'29 season. Shore by all accounts was a physical defenseman, who could also jump up into the play. Shore scored 12 goals that year (an astronomical figure for a defenseman at the time) to go along with 7 assists and 96 PIMs.