Ladies, hide your handbags. The Habs are in town.

Share All sharing options for: Ladies, hide your handbags. The Habs are in town. 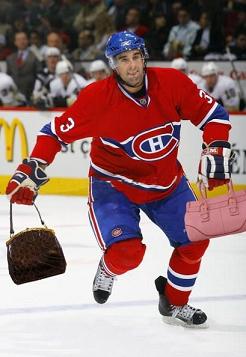 Props to whoever created this Photoshop

The Bruins are set to take on the Montreal Canadiens tonight at the TD Banknorth Garden. Montreal is still looking to clinch a spot in the playoffs. The Habs can stake claim to a playoff spot in the East with either a win or an overtime/shootout loss tonight.

Boston
The Bruins aren't saying much about injuries now that the playoffs are right around the corner. Claude Julien canceled the morning skate today, so that complicates things even further. Here is what we do know:

*Montreal lines according to NESN.com

- The Bruins called up Vladimir Sobotka from the Providence Bruins.

- The Canadiens callled up defenseman Yannick Weber from the Hamilton Bulldogs. Weber is expected to see some time as the pointman on the power play tonight.

- Several of the B's will be sporting a new look tonight after participating in WBCN's Cuts for a Cause to raise money for the pediatric cancer unit at Mass General Hospital. Speaking of using grooming habits and hockey to raise money for charity, the Bruins Foundation has launched Beard-A-Thon. Fellow Bruins blogger Cornelius Hardenbergh was chosen as today's "Beard of the Day".

- Mathieu Schneider (upper body injury) is participating in the morning skate for Montreal.

- For more on the Habs, check out Habs Eyes on the Prize and Robert's admission that the Bruins hold a special place in his heart.