B's finally ready to drop the puck in round 2

Share All sharing options for: B's finally ready to drop the puck in round 2 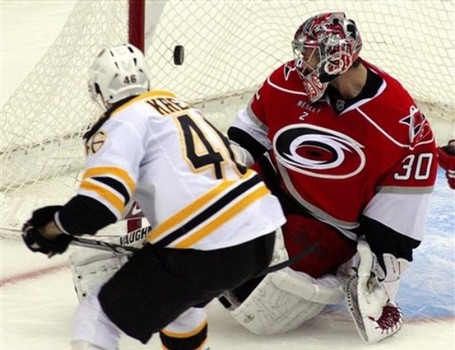 After more than a week off after sweeping the Montreal Canadiens in the first round, the Bruins will return to The Garden ice tonight to face the Carolina Hurricanes in game 1 of the Eastern Conference Semifinals.

Carolina
No Injuries to Report

- The Bruins had an optional skate this morning, while the Hurricanes decided not to hold a morning skate.

- Manny Fernandez was the first goalie off the ice this morning, but I would be very surprised to see him get the start tonight.

- Claude Julien said that Andrew Ference is a "game-time decision". I would expect Ference to be in the lineup tonight.

"I've had success against Boston in the past. I like playing in their building."
- Eric Staal

Eyes on the Storms

Canes Country (SBN): Bubba and Cory do some great work over there. Their daily Hurricanes Newsstand will point you in the right direction for news and stories on this series from both sides of the Mason-Dixon Line.

Tracking the Storm: Blog from Carolina Hurricanes official website. Think of it as Carolina's version of Bish's Blog.