Share All sharing options for: Brutus "The Barber" Beefcake stops by B's practice 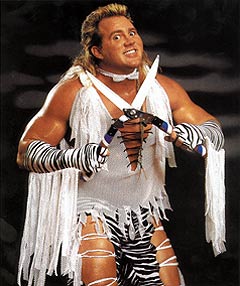 Joe Haggerty from WEEI is reporting that former WWF wrestler Brutus "The Barber" Beefcake was spotted at Ristuccia Arena in Wilmington this afternoon watching the Bruins practice.

There was actually a Brutus "the Barber" Beefcake sighting at Bruins practice on Saturday morning. When I first saw the bleach blonde hair and the tight white UnderArmor T-shirt I thought it was Randy "The Ram", but Brutus still looks like he could get in the ring and lock down a few sleeper holds if he really wanted to. Mr. Beefcake is a friend to one of the members of the B’s training staff, and was observing as a guest of the club. No word on whether he gave out any unwanted haircuts following practice. Joe Haggerty's WEEI Big Bad Blog

Those of you who didn't follow wrestling, might know Brutus "The Barber" Beefcake (whose real name is Edward Leslie) as the man who caused an anthrax scare on the MBTA. While working as a fare collector at Dowtown Crossing in 2004, Leslie reportedly left "white powder" out on the counter of his booth. A cocerned T rider reported it and the station was shutdown due to concerns that the substance could be anthrax. After an investigation it was reported that the powder was cocaine. Leslie was fired by the MBTA for violating their drug policy and checked into rehab but still denies that the substance was cocaine.

The Hurricanes have Ric Flair, so I guess the Bruins had to match them by getting Brutus "The Barber" Beefcake to jump on the Black & Gold bandwagon.