Share All sharing options for: Flyers likely opponent for Winter Classic; BC to play game at Fenway...and maybe BU 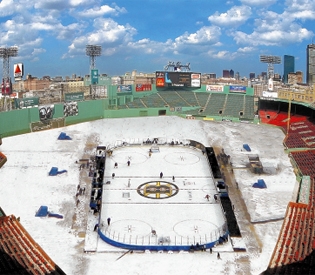 Jeff Howe of The Metro is reporting that according to sources, the Bruins' opponent for the 2010 Winter Classic at Fenway Park will likely be the Philadelphia Flyers. Initially, reports had the Flyersand Capitals as the possible visiting team with the Caps being the front runners. The article also reports that according to a source, the Boston College men's hockey team will also play a game at Fenway Park. It is also being reporting that Boston University is also in talks with Fenway Sports Group about playing a game at Fenway. I would love to see a BU-BC game at Fenway, but I don't think either team wants to have a Hockey East game played outside. I would guess that if BC or BU play at Fenway it would be against a non-conference team.

According to Joe Haggerty of WEEI, NBC is advocating for the Flyers to be the Bruins' opponent on New Year's Day. For some reason, NBC thinks that Philadelphia will draw better ratings than the Washington Capitals. Correct me if I am wrong, but don't the Caps have the most exciting player in hockey? The average casual sports fan (Let's be honest. That is who this event is aimed at.) probably couldn't name a single player on the Flyers. Either way, it will be a fun event.