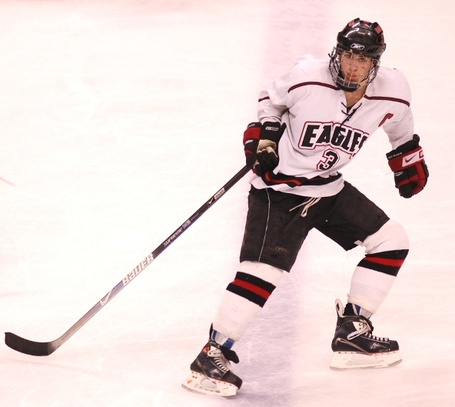 Nick Leddy was invited to play with the United States Development Program this year but decided to stay in Minnesota to finish out his high school career. Leddy led Eden Prairie High School (not to be confused with Eden Hall JV) to a Minnesota Class 2A State Championship. He was named 2009 Mr. Hockey, an award given annually to the most outstanding senior playing high school hockey in Minnesota. Leddy is scheduled to enroll at the University of Minnesota this fall.

- Puck mover who makes good decisions with the puck

- Has a good shot

- Has potential to be a two-way defenseman

- DJ Powers of Hockey's Future describes Leddy as "the consumate team player" and a "quiet leader that leads more by example".

- Could improve play in defensive zone, especially in front of the net.