Share All sharing options for: Marco Sturm wants to stay in Boston 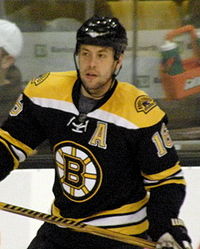 Marco Sturm's name has been bounced around in trade rumors around the league all summer, but according to WEEI's Joe Haggerty Sturm isn't going anywhere. Haggerty spoke with Sturm after the NHL Winter Classic press conference at Fenway Park yesterday afternoon. The winger, who is recovering from knee surgery, said that he does not want to waive his no-trade clause and added that he was not been asked to do so.

"I have heard there are rumors, but no I haven’t (been asked to waive my no-trade). Obviously we’re pretty tight against the cap and we still have two people to sign," said Sturm. "So obviously one of them on the team has to leave, but it’s part of the game. It doesn’t matter who it is. It’s just the way it is."

Does Sturm envision any scenario where he would waive his no-trade clause if the Bruins approached him with a trade in place?

"No. I’m planning to stay here," said Sturm, who can now be crossed off the list as a potential trade chip to make cap space this summer. "I still have two more years (on my contract). I definitely love it here on and off the ice."

So, it sounds like The Sturminator is staying in Boston. I think if Sturm's knee can hold up, he will have a big season, especially if he is called on to produce more offensively. According to all reports, Sturm has not experienced any setbacks in his recovery and is expected to be ready for the start of the season.

The Bruins only have a limited number of players that they could potentially move to free up cap space. It will interesting to see what moves are made in the coming weeks.