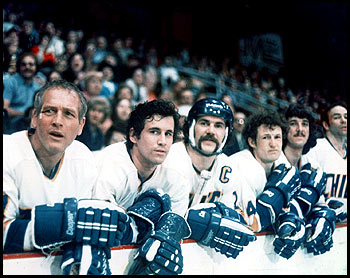 Since we are officially in the dog days of the NHL offseason, I thought we would do something fun and get the readers involved (read: lazy and uninspired filler content). Here is how this is going to work, you have to come up with a complete roster comprised of movie characters (real-life players don't count, so no "Miracle" players. Slap Shot characters who were also players are OK.). You need a coach, 4 lines of forwards, 3 defensive pairs, and 2 goalies. You can also assign a captain and 2 alternate captains. Have at it.

Here is my team (I kinda went nuts with it):