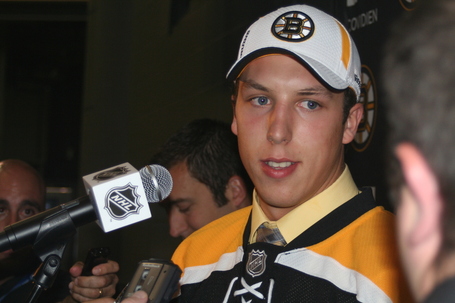 Several of the Bruins' prospects will participate in this week's development camp, including Jordan Caron, the Bruins' first round pick in this year's draft. The camp begins today with medical and physical testing before the prospects get on the ice at Ristuccia Arena in Wilmington for on-ice sessions starting tomorrow and continuing until Saturday, July 11th. This is the third year that the Bruins have held the development camp. The camp gives the players a glimpse of what life will be like for them as a member of the Boston Bruins and it gives the organization a chance to evaluate the progress of their prospects and see how they will fit into the team's systems. It also gives fans an opportunity to see players that they have heard about but have not had the opportunity to see play. All on-ice practice sessions are open to the public and free. The first on-ice session is scheduled for Wednesday at 9:30 a.m. at Ristuccia Arena.

BostonBruins.com has the official release and full camp schedule.