Will we see a return of the Ryder-Savard combo to start the season?

Share All sharing options for: Will we see a return of the Ryder-Savard combo to start the season? 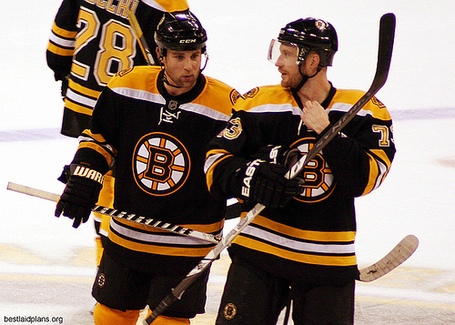 Whether or not Phil Kessel re-signs with the Boston Bruins remains to be seen, but one thing is clear: the Bruins will start the season without the injured goal scorer, who underwent off-season shoulder surgery. So, who will slide up to the first line in place of Kessel? One likely candidate is Michael Ryder.

When the Bruins signed Michael Ryder as a free agent last summer, everyone seemed to think that the intent was to pair Marc Savard with Ryder. One paper, the two players' games seemed to compliment each other nicely. Savard is considered one of the game's best set-up men and Ryder is a pure finisher with a quick shot. Maybe it was Ryder adjusting to a new team, a new town, and a new system or maybe it was an initial lack of on-ice chemistry between Ryder and Savard. For whatever reason, the Savard-Ryder combo never seem to click at even strength.

After Michael Ryder found the back of the net in the season opener against Colorado off a feed from Savard, he would go scoreless in his next 8 games. It was around this time that Claude Julien shuffled his lines and put Ryder on a line with rookie Blake Wheeler and emerging centerman David Krejci. The new line combo seemed like a catalyst for Ryder as he hit his stride after a slow start and finished the year with 27 goals. As the year progressed, Ryder looked very comfortable skating alongside his new lines. He also seemed to click with Savard on the power play as #91 and #73 were often on the ice together on the man advantage. Their success on the power play showed that perhaps a line with Savard and Ryder could work.

Will we see a return of the Savvy-Newf experiment? Will someone else get promoted to the first line? ...or will Claude Julien completely re-shuffle the deck?