What is up with Rene Rancourt ?

Share All sharing options for: What is up with Rene Rancourt ? 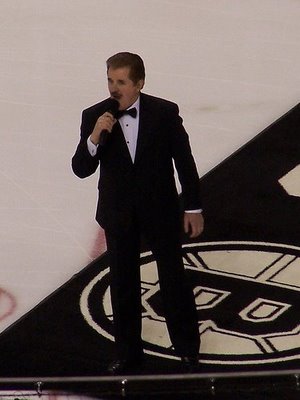 For much of last season something seemed to be missing at The Garden (and I'm not talking about the sea of empty seats). I am talking about the man with the tuxedo and the golden pipes: Mr. Rene Rancourt. The classy crooner has been the Bruins' anthem singer since 1976 and has become as synonymous with the Boston Bruins as the Spoked-B and "The Goal". For years, Rancourt was the Cal Ripken of anthem singers. If you were going to the B's game there was a good chance you were going to hear Rene sing the national anthem and if you were lucky they were playing a team from north of the border and you got an encore, but last season Rancourt had a much lighter schedule. Perhaps Rancourt is heading into semi-retirement or maybe the Bruins are forcing the mustachioed music man out the door...or maybe I am reading way too much into this application on the Bruins website for an alternate anthem singer. Whatever the case may be, I hope to hear Rene Rancourt belting out "The Star-Spangled Banner" and "O Canada" on a regular basis at the TD Garden. A salute and a fist pump to Mr. Rene Rancourt. You are a true Boston sports legend.