Could the Bruins be signing Francis Bouillon?

Share All sharing options for: Could the Bruins be signing Francis Bouillon? 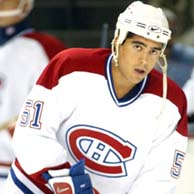 CKAC, a French language sports radio station in Montreal, is reporting that the Bruins are close to signing defenseman Francis Bouillon. Bouillon has spent his entire 9 season NHL career with the Montreal Canadiens aside from a 4 game stint with the Nashville Predators in 2002. The 5'8", 200 lb blue-liner has recorded 102 points (21-81-102) in 485 career NHL games with a lifetime +/- of minus-24. If Bouillon is signed by the B's, he will likely be a 3rd pairing or depth defensman. Although Bouillon is under-sized, he is not afraid to play physical. According to those who have seen him play on a regular basis, he is like Rudy on skates. One poster on HFBoards described Bouillon as " big heart, small talent". The scouting report on Bouillon seems to be that is a decent puck handler, who can log a lot of time, but has some trouble in his own end of the rink, especially moving big forwards out from in front of the net. Perhaps Francis Bouillon was another casualty of the Habs' new policy of no forwards over the height of 5'9" and no defenseman under 6'4". The New York Rangers have also been rumored to be suitors for the free agent defenseman's services.