Could Paul Kelly's days be numbered as NHLPA executive director?

Share All sharing options for: Could Paul Kelly's days be numbered as NHLPA executive director? 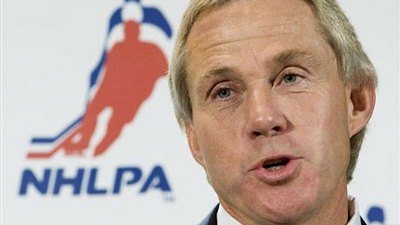 NHL Player's Association executive director and Boston native, Paul Kelly could be on his way out as head of the player's union. The lawyer, who was a founding partner in the Boston law firm Kelly, Libby, and Hoopes (now LibbyHoopes) has been the executive director of the NHLPA for the past two seasons. Player representatives from all 30 NHL teams met with Kelly on Sunday afternoon in Chicago for a board meeting. Many players have cited a "disconnect" between Kelly and the players and concerns over Kelly's perceived close relationship with NHL commisioner Gary Bettman and other league executives. Chris Chelios and Shawn Horcoff appear to be in Kelly's corner, but many observers believe that the NHLPA's executive director could be on his way out.