Share All sharing options for: 5 players participate in informal skate today at Ristuccia 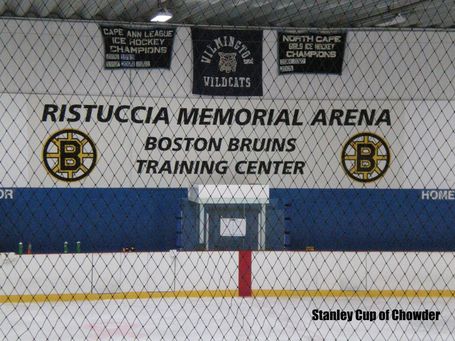 Five players took to the ice in Wilmington today for the first informal skate before training camp gets underway in less than two weeks. Tuukka Rask, Kevin Regan, Marco Sturm, David Krejci, and Shawn Thornton all skated today. Tim Thomas and Zdeno Chara were at the rink, but did not get on the ice. Chara stopped by the rink to speak with the media about the upcoming season.

Both David Krejci and Marco Sturm appear to be recovering well from their injuries. Krejci is not expected to participate fully in training camp this year after undergoing offseason hip surgery, but expects to return to the lineup sometime in October and has not ruled out an opening night return. Meanwhile, Marco Sturm seems ready to go and back to 100% after recovering from knee surgery that put the veteran winger on the shelf for most of last season.

The Bruins expect a few more arrivals in the next day or so. Newly acquired defenseman Derek Morris is expected to arrive in The Hub tomorrow and be on the ice sometime this week. Dennis Wideman and Byron Bitz will also be in town this week to participate in the Pro-Am at the Deutsche Bank Championship tomorrow at TPC Boston in Norton along with teammates David Krejci and Shawn Thornton. The Bruins will present a check for $18,000 to the MGA's First Tee program, which introduces children to the game of golf.

Marco Sturm and goalies Tim Thomas, Tuukka Rask, and Kevin Regan are the only players expected to be on the ice at Ristuccia tomorrow. They are scheduled to skate at 11:30 a.m.