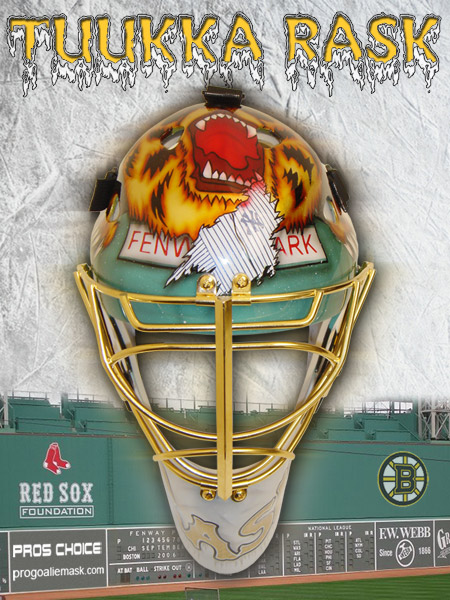 When Bruins goalie Tuukka Rask stepped on the ice at Fenway Park before the NHL Winter Classic, you may have noticed Rask was sporting a new mask to commemorate the event. The Fenway-themed mask was painted by Georgetown, MA native Luke Dobie, who owns LD Designs. Dobie along with Beverly police officer Mike Boccuzzi and Domenic Malerba of Pro's Choice in Middleton contributed to the design of the mask. I recently had the opportunity to ask Luke a few questions about his Winter Classic masterpiece.

How did you get involved with painting Tuukka Rask's mask for the NHL Winter Classic?

I got involved with painting Tuukka's mask for the WC through my friend Mike (Boccuzzi). As soon as news broke that the Winter Classic was going to be held at Fenway he tried to get the gears rolling on it. Having painted one of Mike's masks before, he wanted to bring me into the project, which I had no problem with.

When did you get involved in this project?

I did not fully get involved in the project until...probably mid-November.

Mike brought me some really rough design ideas (really rough pictures cut and pasted onto a drawn goalie mask). I liked what he had, so I took them back home with me and changed things around a bit. His original idea was a great one to start with. The idea was his: the bear coming over the pressbox section of Fenway, the logos on each side and Rask around the chin in a Red Sox font. There were supposed to be WC colored socks on one side. Basically, the Red Sox socks; colored differently.

The bear on Tuukka's mask looked a lot like the bear on Andy Moog's old mask. I read an article that said you got your start painting goalie masks as a kid when you painted your street hockey mask to replicate Andy Moog's. Was this design a subtle nod to the Bruins past and your memories of growing up a B's fan?

The bear was designed off a reference picture of a bear I found.  To me, the current bear on his mask didn't look like a bear at all.  All the past Bruins goalies have had decent looking bears that actually looked like bears.  Moog, Tallas, and Ranford to name a few.  My thought process was to get back to something actually looking like a bear.  Maybe subconsciously it was a subtle nod to previous B's goalies. As it does have some design elements of the previous goalies I mentioned.  Moog's mask was an instant classic as soon as it hit the ice.  In a way, the coloring and jagged looking black fur on the bear I did are definitely similar to Moog's: http://www.thehockeynews.com/imgs/dynamique/photos/original/article_19288_2.jpg

However, the artist who did Fernandez's mask really paid tribute to Moog more so than me: http://www.tanhaa.net/wp-content/uploads/2009/11/manny-fernandezRonaldMartinezGI.jpg
Here are a few that I somewhat wanted to get back to in terms of design..
http://cdn.ngin.com/attachments/photo/0068/9067/section_wof_large.jpg
http://www.bestsportsphotos.com/image.php?productid=19037
and some of the bears I used:
http://cdn.holytaco.com/www/sites/default/files/images/2009/species-spotlight-grizzly-bear-brown-mouth-open-black-nose-attacking-growling-biting-photo.jpg
http://animal.discovery.com/tv/a-list/creature-countdowns/hissy-fits/images/hissy-bear.jpg

I understand you added some of your own ideas including the chewed up Yankees jersey. Tell about the design elements that you added and your thought process.

In terms of the rest of the mask, there had to be snow coming down from the sky. It's only fitting because the game was being played outdoors. Once I had the bear down, to make it look a bit more mean, I had it breaking away parts of the wall. This just gave the mask a bit of movement and something to make the bear look more alive. You can't just have a giant bear hanging out on top of the fenway pressbox without it doing something. The Yankees jersey...this idea was Dom Malerba's and mine. How can you mention the red sox without mentioning the Yankees? The jersey moved back and forth between the claws and teeth of the bear throughout the design process.  I finally decided to hang it from a tooth to get it right out there on the front of the mask for people to see. We threw around the idea of adding a number on the jersey, but to be honest I wasn't even sure that the yankees logo would be shown. I thought Tuukka was going to be asked to tape over it.

Overall, while painting this mask, I wanted it to be clean first and foremost. Most mask painters don't spend the time to make sure their work is clean with no cut marks from a knife and no overspray etc. The good ones do of course.

Most of your business is painting for the motorsports industry. Now that you have painted the mask for Tuukka Rask, have any other NHL or college goalies approached you about painting masks for them?

Goalie masks are a totally different market than what I'm used to. The clientele working with motorcycles and race cars is much higher. That's not a knock at hockey players, that's just how it works. Race cars can cost hundreds of thousands of dollars so the person getting involved with them is expecting the absolute best work they can find. Same with motorcycles..both are extremely expensive activities. There's more of a connection with art in motorsports, between having race shells and cars painted as well as their helmets. Customers have more of an understanding that artwork is going to be pricey and have a high quality to it, much like going to Ferrari and spending a decent amount of money on a perfect hand built exotic. I've had clients ask me to redo paint jobs for the most miniscule things. So at the point I'm at now, everything has to leave my shop as perfect as possible. I've had people comment saying that the whole helmet looks like it's done by a computer, or it looks "factory." People want the best quality they can get if they are spending their hard earned money. Plus, my name is on it...I don't want to be associated with lesser quality jobs. I could go on and on about the quality of jobs, but I won't bore you with that.

Other hockey business... there have been a few bites... but nothing I can really talk about at this time. I usually try to keep all my jobs hush, hush until they are complete and the customer wants to show them off. Most of the customers want to show off their artwork themselves and brag a bit, so I let them do that instead of showcasing it myself.

Do you still play hockey? Are you a goalie? If so, does having the goalie mindset (let's be honest you goalies are a different breed) help you come up with designs that capture the personality of the specific goalie you are working with?

I do still play hockey off and on and I am a goalie. Having a goalie mindset really didn't tie into the design at all really. I think the artistic mindset comes first no matter what, with me at least.

What was the feedback from Tuukka about his mask? Did he have any role in the design process?

I never got to meet Tuukka during the design period at all and get to know him. Most of the time I sit down with the client and talk through designs. I don't like to have the whole design process happen like a business meeting. I stress that they should have their personality in the artwork and have it be unique to them. Most of my customers are great and I keep in touch with them after the job is complete. After all, it should be fun to do something like this. I do kind of wish Tuukka had a say in the design process and brought his ideas to the table. But he has a busy job and should be concentrating on that :)

What happened to the mask after the Winter Classic?

After the WC, I was told Tuukka was keeping the mask. I did not receive any feedback from him directly on the mask, but I heard that he liked it. I'd like to meet up with him at some point for some feedback. Like I said, I like to keep in touch with my clients and get as much feedback as possible. When I finished the paint, the mask was put together by Dom Malerba, I grabbed it really quick to take some nice pictures of it, then gave it back to him. I'm not sure how it made it into Tuukka's hands after that.

Were you able to attend the Winter Classic or any of the events surrounding the game?

Unfortunately, I was unable to attend the Winter Classic game itself. Which I was fine with, considering it was really cold out. I was able to attend the Legends game which was fun. Very cold, but fun. It really was tough to see the game from where I was seated (on the 3rd base side) but was able to get up on top of the green monster and watched quite a bit of it from there. The rink was really designed for those seats. The view was much better, the only downside was the wind and snow coming up over the top freezing us all. I guess there was more going on around Fenway during the Winter Classic? I did not have a chance to check any of it out. I would have liked to however.

I was taking a look at your site. As a big Simpsons fan, I have to say I love the Lisa the Goalie mask. Who did you paint that for? 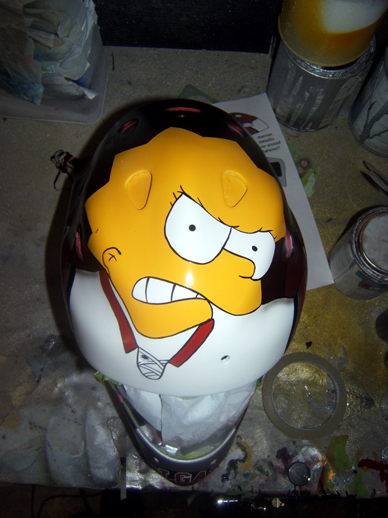 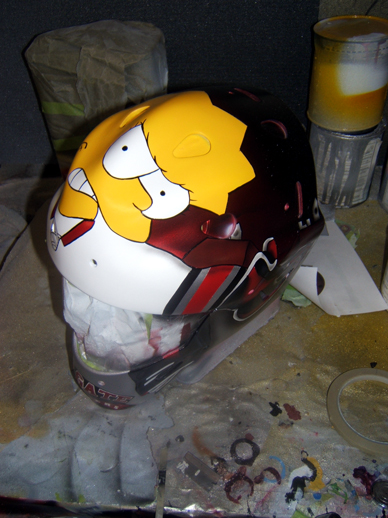 That mask of Lisa Simpson was great! The goalie is Lisa Plenderleith. She's a goalie or was a goalie up at Colgate University.  I'm not sure what year she is now. That was actually her idea to put Lisa Simpson on the mask wearing the same equipment that she wears. I thought it was great and added a bit more to it including some of the buildings around Colgate and the logo on the chin. I thought it was a great idea, really fun to do. I wish I could find some action shots of her wearing it.

Tell me a little bit more about your company and the services you have available. If any beer leaguers out there want to have a mask painted by you, how can they get a hold of you?

Right now I'm trying to stir up more business for myself. I've always been a fan of Troy Lee Designs and to get to the point where I have other painters working for me has been an ultimate goal of mine. Of course there's quite a bit of work to do before I make it to that goal, but it's something I love doing. Growing up we were all told to do something with our lives that we enjoy. Most of us don't follow that, but it's something I've been working on since roughly the 4th grade and will continue to work at.

I should have a new website up within a month or two, so other goalies can get a hold of me through my email (Luke.LDDesigns@gmail.com) and see some work on LukeDobieDesigns.com 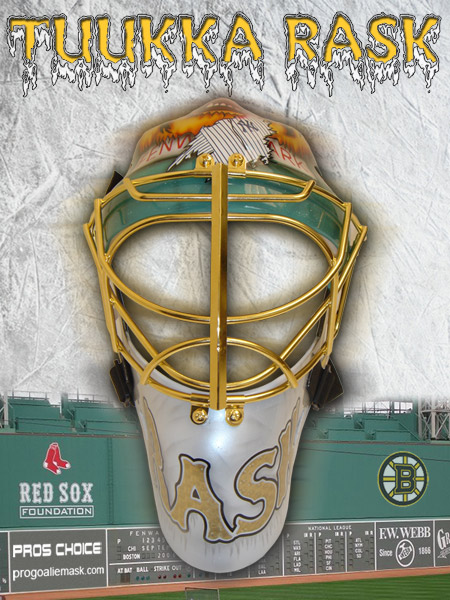 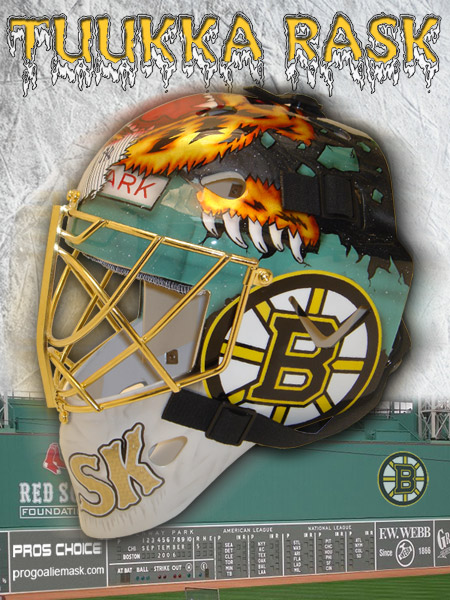 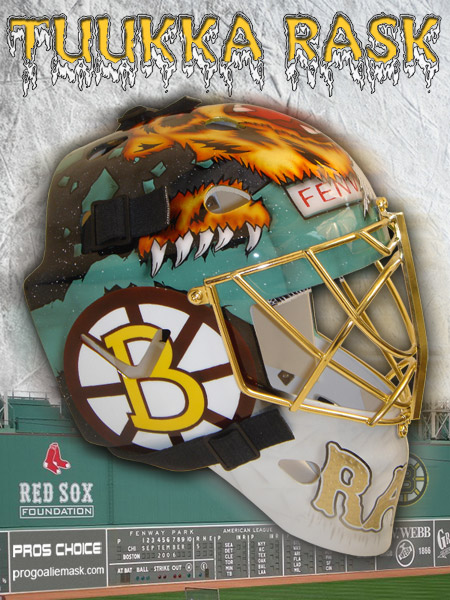 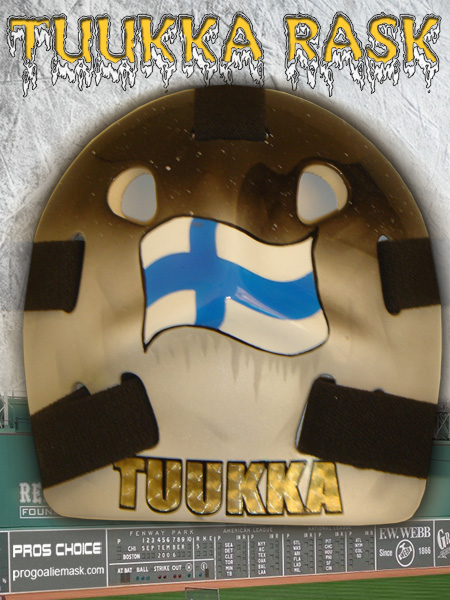 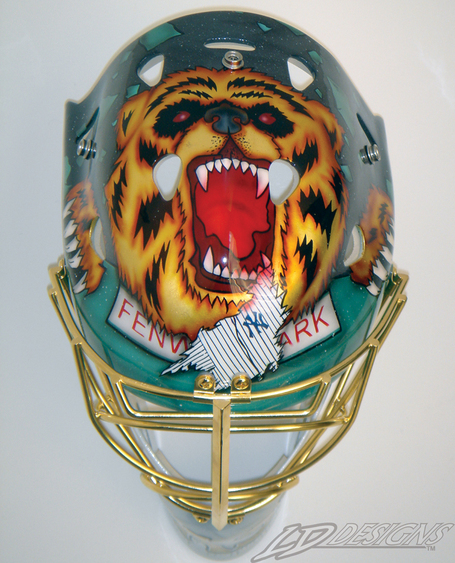