Share All sharing options for: Bruins in Buffalo looking to end 5-game skid

The Bruins will be back in action tonight when they take the ice in Buffalo to play the Northeast Division-leading Sabres. The B's will try to snap a 5-game losing streak and rebound from a 5-1 loss to the Carolina Hurricanes on Sunday, a game that most Bruins fans would agree was their worst performance of the season. The Bruins will welcome back Marc Savard (torn MCL), whose offensive ability was dearly missed over the past 8 games.

- The Bruins and Sabres have met twice this season with the Bruins taking both games.

- Marc Savard skated on a line with Milan Lucic and Miroslav Satan at Thursday's practice.

"He and I had some chemistry last year," Savard said of Lucic, his linemate for most of last season. "Now we've got another 81 on the other side. Hopefully that's a good thing."

- Marco Sturm (leg) practiced yesterday, while Andrew Ference (groin) skated on his own. Sturm traveled with the team but is not expected to play tonight.

- Mark Recchi missed practice on Wednesday so he could carry the Olympic torch through his hometown of Kamloops, British Columbia

- No, that isn't a Make-a-Wish Kid out there on the ice warming up with the Sabres. That's former BC Eagle Nathan Gerbe. The half-pint forward was called up by Sabres from Portland over on December 9th, but has watched all but 2 games from the press box.

- The Bruins, who have struggling offensively, will have their work cut out for them against red-hot goalie Ryan Miller. Hopefully, Miller is distracted by his new "lifestyle"... 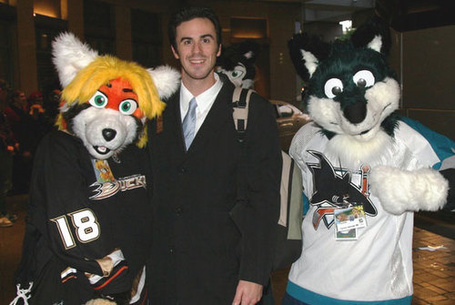