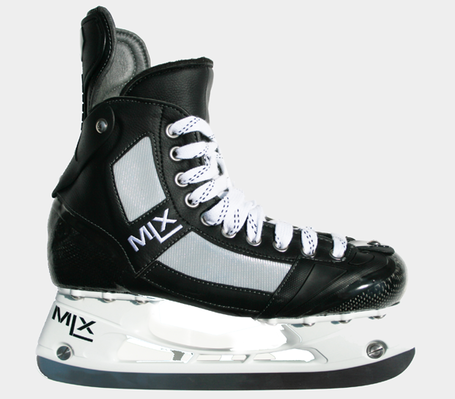 Recently, MLX sent me a pair of their skates to review. MLX is a new entrant in the high-end hockey skate market. The company, which is partially backed by Mario Lemieux, was founded by former U.S. Olympic speedskater and former Chicago Blackhawks skating coach, Dave Cruikshank. Cruikshank's plan was to create a better hockey skate by incorporating some of the design elements of a speed skate. MLX wanted to create a lightweight, composite and leather hockey skate that form-fits to the skater's foot while still providing superior comfort and protection. A few NHL players have made the switch to MLX skates including Dustin Byfuglien, Sergei Gonchar, and Paul Gaustad.

I had the chance to play a few rec league games on the MLX skates and this is what I found:

Even after just two ice sessions, these skates are already the most comfortable pair of hockey skates I have ever worn. I was a little nervous when I first tried them on because they were very tight. After looking at MLX's website, I found out that this is common before the skate is baked and molded to the skater's feet. Following the manufacturer's instructions, I set the temperature and baked my skates in my kitchen's oven (shhh, don't tell my landlord). After successfully heating and removing my skates from the oven without burning down my place or suffering any third degree burns, I began the process of molding the skates to my feet. After a few minutes, I could feel the skate starting to mold to my foot. The end result was a comfortable fit, even before skating on them. After two games, the skates broke-in even more, creating a very comfortable fit.

Note: These skates run big. I wear a 10 1/2 in CCM skates and 12 in most sneakers and I wear a size 10 in MLX skates. The skates are not available in half sizes, but since the skate boot is molded to the skater's foot, a custom fit should be created after baking. If for some reason the skates do not fit properly after molding, MLX includes custom fit inserts that can be added to create a better fit. The skates also feature removable toe plugs that allows growing youth players to grow with the skate.

There is not a skate on the market that is going to make me a great hockey player or even a good hockey player, but I can say that I like the feel of these skates on the ice (even with the hack-job sharpening I got at my local rink). I feel more stable and balanced in these skates than in the skates I normally wear (CCM Vector Control '08).

MLX skates are light, but they feel a bit heavier than my CCMs. It should be noted that my CCMs have Rocket Runner disposable blades and MLX skates have a traditional steel blade. I'm guessing that if I put a regular blade on my CCM skates, the weight would feel about the same. MLX Skates are still very light.

As someone who likes a lot of ankle support, I was concerned about the lower boot height. Since the boot forms tightly to your foot, the lower boot was not an issue. I was able to get much more support from these skates than other skates I have played on with higher boots.

The designers clearly went with performance and function over aesthetics on the MLX skates. That is not to say that it is a bad looking skate, but it just has an unfinished look to it. That unfinished look is due in large part to the exposed hardware that allows the player to make adjustments and repairs to the skate easily. The skates feature a removable tendon guard and tongue that can be replaced with the turn of a few bolts. The skates also have bolts that fasten the blade holders to the boots instead of rivets, this allows skaters to offset the position of the blade to fit their skating style or replace the blade holder quickly. It also has exposed bolts, which allows the blade to be changed quickly with a flathead screwdriver.

Unfortunately for you (and fortunately for me), I did not take any hard slap shots or vicious slashes to the skates in my rough and tumble no-check rec league. I cannot vouch for the type of protection that these skates provide...yet.

Overall, I really like the comfort and feel of these skates and will most likely continue to wear them. At a $799 price point, the recreational player probably isn't the key target market for MLX skates. While MLX does manufacture a great skate, I could not justify paying $800 for skates. To be honest, all my equipment combined is worth about $350. Maybe once MLX penetrates the high performance hockey skate market, the price will drop and they will expand their product offerings to gear designed for the recreational player. That being said, If you play the game at a high level or are willing to shell out the money, I highly recommend this skate.