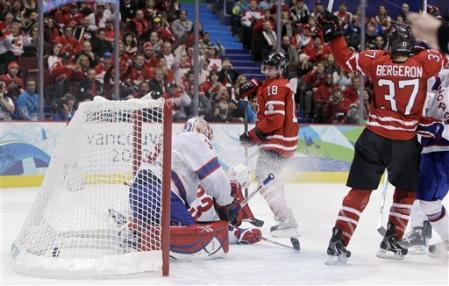 The Men's Hockey preliminaries got underway on Tuesday with two of the countries represented by Bruins players in action on the tournament's opening day.

Patrice Bergeron and the tourney favorite Canada dismantled Norway 8-0. Bergeron picked an assist on Mike Richards goal when he dumped the puck in deep and Richards jammed the puck in for a 3-0 lead in the second period. Bergeron began the game on a line with Sidney Crosby and Rick Nash, but Mike Babcock quickly shuffled his lines, creating the dominant line of Sidney Crosby, Rick Nash, and Jarome Iginla. Iginla finished the game with a hat trick, while Crosby added 3 assists (all on Iginla's goals). Robert Luongo (who was sporting a sweet lumberjack mask) wasn't tested much as he turned aside 15 shots to earn the shutout.

The U.S. team opened with a 3-1 win over Switzerland on Tuesday. Tim Thomas did not see any action in the win, as Ryan Miller is expected to be the starter throughout the tournament. Miller made 14 saves on 15 shots, while Bobby Ryan, David Backes, and Ryan Malone all found the back of the net.

Russia breezed past Latvia with ease 8-2 in the nightcap, as Alex Ovechkin finished the night with 2 goals.

Marco Sturm and the German team with take on Sweden at 7:30 PM ET