Tim Thomas will not dress for Thursday's game vs. Norway

Share All sharing options for: Tim Thomas will not dress for Thursday's game vs. Norway 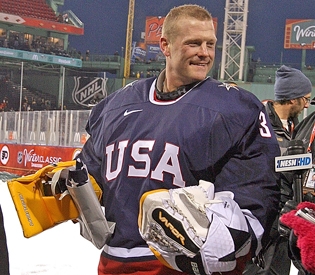 While Olympic teams can carry 3 goaltenders, only 2 goalies can dress for each game. Kevin Allen from USA Today is reporting that Jonathan Quick will be the backup goalie for Thursday's game against Norway after Tim Thomas dressed as the backup and worked the door for Tuesday's 3-1 win over Switzerland.

US Coach Ron Wilson makes it official: Ryan Miller will play every game for the Americans unless he falters. Quick will be backup vs. Norway

Despite a limited chance of playing time during the Olympics, NESN's James Murphy reports that Tim Thomas is excited to represent his country at the Winter Olympics.

Thomas has always been a huge fan of Olympic hockey. A young Tim Thomas once devised a plan to skip school to watch Team USA play:

"In high school I got caught skipping school watching the USA-Finland game because my best friend was a Finland foreign exchange student, and I wanted to watch it anyway but figured he was a good excuse to my mom if she caught us, and she did. But she wasn’t mad really. She knew I was crazy over that stuff, and she figured that at least I wasn’t out getting in trouble or something. She would let me stay up late and watch the games a lot too. She was pretty cool like that."

While I think Ryan Miller has earned the starting job, as a Bruins fan it does concern me that Tim Thomas could go an entire month without seeing any game action. Thomas last played on February 2nd in a 4-1 loss to the Washington Capitals and the Bruins don't play again until March 2nd.