Share All sharing options for: Interview with Bruins' 2009 First Round Pick Jordan Caron

The Boston Bruins' first round pick in the 2009 NHL Entry Draft, Jordan Caron is fine-tuning his game in the QMJHL this season playing for the Rouyn-Noranda Huskies. Caron started the season with the Rimouski Océanic, but was traded to the Huskies 20 games into the season. Through 29 games this season, the 6'2", 206 lb winger has recorded 34 points (15-19-34) to go along with a +34 rating.

I recently had the opportunity to ask Jordan a few questions:

What was it like attending the Bruins development camp last summer? Did you get a good feel for what it is going to be like playing for the Bruins organization? What did you gain from that experience?

It was a great experience. I had the chance to meet all the organization and all the guys my age, so it's going to be much easier next year when I go to that camp again

How would you describe your game?

I can play both sides of the ice very good, I like to go in front of the net and I have a good shot.

What do you think is the aspect of your game that needs the most work to reach the next level?

I don't skate bad, but I know I will have to improve my explosion to play in the NHL.

What was it like being able to represent your country at the World Juniors? Did you think you were going to able to have that opportunity after you suffered the broken collarbone during the summer?

It was probably the best time of my life over there. We had a great group of guys and the staff and the fans were awesome...and yes, I always believe in my chances of making the team.

Bruins GM Peter Chiarelli was very impressed with your play at the World Juniors. Has Chiarelli or anyone else from the Bruins organization kept in close contact with you since being drafted? Have they told you what their expectations for your development are or how they think you will fit into the organization?

I talked a couple times with Don Sweeney since i got drafted.

You said after you were drafted that you grew up as a Montreal Canadiens fan. Have you been able to convert your friends and family from Canadiens fans to Bruins fans?

There were no problems with that. I think as soon as the Bruins drafted me, all my familly were converted.

You were recently traded from the Rimouski Océanic to Rouyn-Noranda Huskies. How are things going with your new team and what was your reaction when you found out you were traded?

I am from Rimouski and I always played there so it was hard to realize that I wouldn't be playing there anymore, but since I got to Rouyn everything has been perfect. The city is good. We have good fans, a good organization, and a very good group of players, so I like it a lot here so far.

When did you find out that the Bruins were planning on taking you at #25? Did someone from the Bruins let you know that they planned on using the pick to select you or did you just find out when your name was called?

I really had no idea when and who was going to pick me, so I only found out when they said my name.

Have you spent much time in Boston? What are your impressions of the city?

I spent one week during the development camp this summer and another week during the main camp. I didn't get to visit the city or anything but from what I've seen and heard, it is a very nice city.

Special thanks are owed to Jordan Caron, Derek Zona from The Copper & Blue, and Mélanie Allard of the Rouyn-Noranda Huskies for making this interview happen. 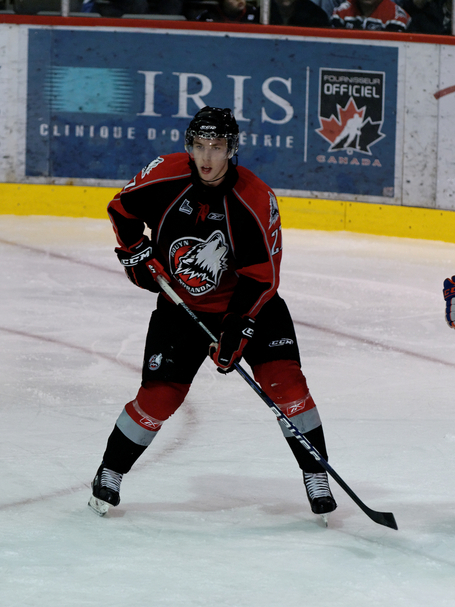