Share All sharing options for: Interview with Bruins 2008 1st round pick Joe Colborne 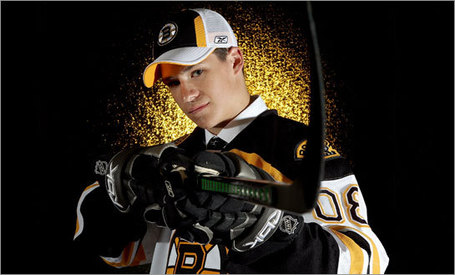 The Boston Bruins' first round pick in 2008, Joe Colborne is in his sophomore season at the University of Denver. The 6'5", 210lb forward ranks third in both goals (12) and points (28) for the #2 ranked Denver Pioneers. The 20 year-old Calgary, Alberta native has added about 20 pounds of muscle since being drafted 16th overall by the Bruins in the summer of '08, has worked hard to improve his overall game, and is a key contributor to one of the best teams in college hockey. I recently had the opportunity to ask Joe a few questions about his progress and life at the University of Denver.

How would you describe your game? Some have compared your style of play to Joe Thornton. Do think that is a fair comparison?

I certainly look up to guys like Joe Thornton, Vinny Lecavalier and Ryan Getzlaf and try to emulate parts of their games, but I don't think I deserve to be compared to any of them yet.

What aspect of your game do you think you need to improve to make the jump to the NHL?

Just about everything. I am continually working on all aspects of my game including my strength, speed and quickness, my shot, stickhandling and physical play.

What went into your decision to play college hockey instead of going the major junior route?

Personally, the college route made more sense because I needed to get stronger and bigger in order to make the jump to professional hockey. Playing in fewer games has allowed me to workout more regularly and has helped me achieve some of the goals that I have set out for myself.

Some have described you as a "pass first" playmaker. You currently rank third on your team in both shots and goals. Have you made a conscious effort to look for your shot more this season?

I feel comfortable as both a shooter and passer, and although I may be a "pass first" player, I feel much more confident in my shot this year thanks to more strength, and I have been shooting more regularly this year.

Camp this past summer was a great learning experience. I feel like I came away from the camp a better player from the ice times and workouts, as well as attaining a much higher level of confidence and comfort from getting to know the people within the Bruins organization.

Have you had much interaction with any of the Bruins' current players? What have they told about what it is like playing for the Bruins?

I got to spend some time with Blake Wheeler during the Development Camp two summers ago. Last summer I also got the chance to work out with a number of the Bruins players that had stayed in Boston. It was a great experience for me to see the hard work and professionalism they bring to the rink every day.

Has Peter Chiarelli or anyone in the Bruins organization expressed to you their expectations for you and how they think you will fit into the organization's plans for the future?

I believe that the Bruins drafted me to be a top forward in the organization and I understand the expectations of being in that type of role.

Have you had a chance to see much of Boston? What are your impressions of the city and Bruins fans?

I have been to Boston a number of times and love the city. There is a ton of history and so many things to do. One of my favorite aspects of the city is how passionate the fans are for their sports.

Denver is currently ranked #2 in the nation. Is there a buzz around campus about this team?

We have a very good team this year and there has been a high level of media attention surrounding our team. It has been very exciting and I look forward to a strong finish.

Some critics say that players wearing cages in college hockey has led to a sense of invincibility and reckless play. Do you think college hockey should switch to half-shields?

I used a half-shield in Juniors and am a definite fan of them. In college I have come to realize that while cages may protect some facial injuries, they can also cause other injuries stemming from players grabbing onto the cage and twisting. I strongly support changing to half shields.

The WCHA covers a wide geographic area. What is the trip to Alaska-Anchorage like?

In a word - cold. But it was not as different as you would expect. When our team was in Anchorage, we were completely focused on winning the two games, so we did not stray far from the hotel or rink.

Trying to balance playing Division 1 college hockey with your school work and college life must be difficult. What is a typical day like for you?

On Monday and Wednesdays, we workout at 7 am. Classes then begin at 8 am and usually you have about 4 hours of class in a day. Practice begins about 3:30 and goes until 5:30. 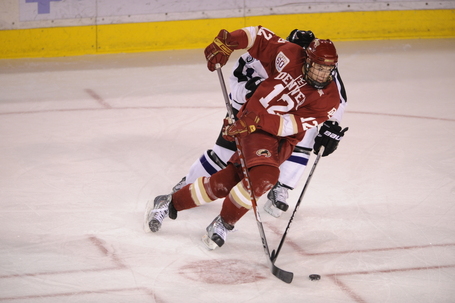 Thanks to Joe Colborne for taking the time answer my questions. I also need to thank Jason Plank from Fear The Fin and Erich Bacher, Director of Media Relations for the University of Denver's Athletic Department for their roles in making this interview happen.